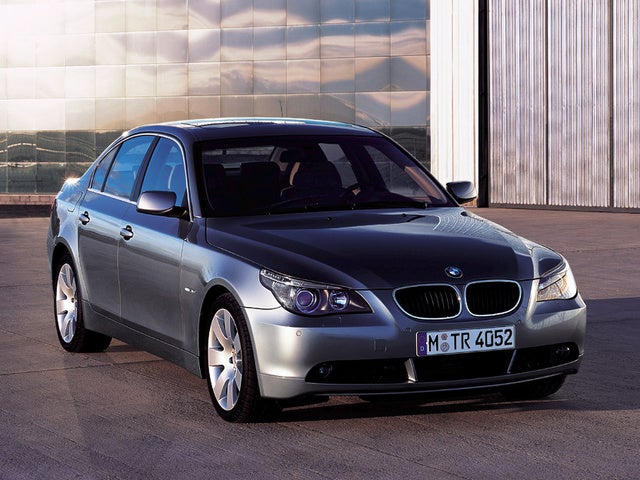 The 2007 BMW 5 Series sedans and wagon deliver luxury in a car that cares not only about the creature comforts, but also class-leading handling and performance.

All 2007 5 Series vehicles are costly, and their iDrive system may drive you ’round the bend.

If you can swing the price and tackle the iDrive system, the 2007 5 Series BMW should please almost anyone. Combining space, comfort, and luxury with superb handling and power, the midsize 5 Series trims will appeal to the most demanding of consumers, from the serious driver to the daily commuter to the vacationing family.

The 2007 BMW 5 Series presents a rear-wheel-drive sedan in the base 525i, mid-range 530i (each of which is also available in an "xi" version with BMW's xDrive all-wheel-drive system), and high-end 550i, as well as a 530xi wagon (an all-wheel-drive trim reintroduced in 2006). With a style last redesigned in 2004, and an engine revamped in 2006, these midsize luxury sports sedans and wagon receive accolades for their comfort and luxury while offering handling and a level of driver involvement matched by few competitors. Only the quirky, oft-discussed styling, confusing iDrive system, and high sticker price mar an otherwise unblemished driving experience.

There are, in fact, very few tweaks to the 5 Series for 2007. New standard features for the year include a four-year subscription to BMW Assist (which contacts dealers when service is due and calls for help in a collision) and an auxiliary input jack for MP3 players. Optional HD radio boosts the audio component. Optional Night Vision uses thermal-imaging technology to detect animals and people in the dark. A new sport package option offers a redesigned steering wheel and 20-way adjustable multicontoured front seats. 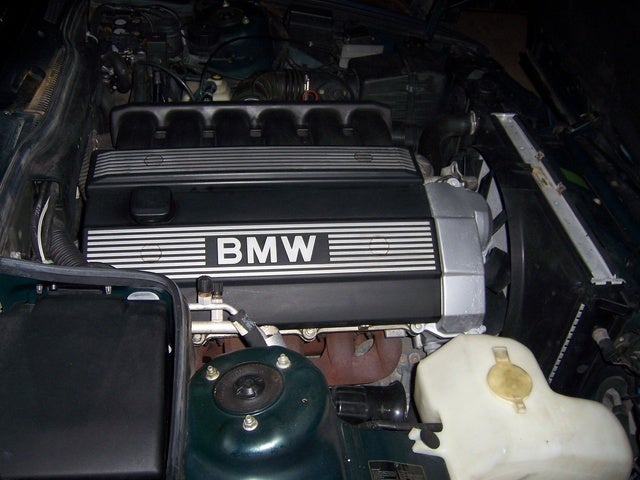 The 2007 engines carry over from a redesign done the previous year, when they became the only engines in production with a magnesium alloy engine block (which lowers their weight). The 525i offers a 3.0-liter inline six-cylinder engine with 215 hp and 185 lb-ft of torque. Mileage estimates reach 20 mpg city and 30 highway, with slightly lower numbers for the xi AWD version (19/27 mpg). The base 525i uses a standard manual transmission or an optional six-speed automatic with Steptronic shifting.

The 530i also offers a 3.0-liter inline-six engine, but upgraded controls and intake systems produce greater horsepower (255 hp) and torque (220 lb-ft). Mileage estimates match those for the 525i trim, and a manual transmission is again standard, with options including the six-speed Steptronic automatic and six-speed Sequential Manual Gearbox (SMG). Also available for the 550i, the SMG uses a computer to determine when to engage and disengage the clutch, leaving drivers to shift up or down by moving the gear lever or paddles on the steering wheel. While applauded when used for manual shifting at higher speeds, the SMG encounters rougher waters in automatic mode at slower speeds.

The high-end 550i sedan runs on a 4.8-liter V8 engine with 360 hp and 360 lb-ft of torque, yielding mileage estimates of 15 mpg city and 23 mpg highway. One test drive found acceleration from zero to 60 took about 5.3 seconds, leaving competitors such as the Jaguar XK or Nissan 350Z in the dust. Drivers can again select from a manual transmission, six-speed automatic, or six-speed sequential manual gearbox.

All trims (including the wagon) are commended for sports-car-like handling and acceleration, particularly the V8. The inline-six engine is no slouch, however, with one review claiming that the I6 engines deliver a balance of torque, ease, and responsiveness unmatched in V6 engines. The manual and automatic transmissions receive equal praise, although the availability of a manual transmission was widely applauded in reviews.

While the 530i and 550i sedans seem to garner universal admiration, the verdict on the 525i is mixed, with some reviews calling it sluggish, while others call the entire series – including the 525i – a delight to drive.

The 530xi wagon offers additional storage and hauling with the same handling, acceleration, and braking as its sedan brethren. The wagon’s suspension self-levels to accommodate the heavier rear loads that can fit into its 33.6 cubic feet of cargo space (expanding to 58.3 cubic feet with the rear seats folded). Considerations such as the flat load area, four enclosed bins for storage, cargo tie-downs, bag holders, cargo net, and cargo cover represent convenient touches. The rear liftgate opens electronically via dashboard control or key fob for easy access to the storage area and closes itself softly – no slamming required.

The 5 Series trims are not as quiet as the 7 Series, according to reviews, but their solid construction and balance offer a smooth ride without disturbing vibrations or odd noises.

The Dynamic Stability Control (DSC) system comes standard on all trims. The DSC not only helps drivers avoid skids, but also includes a brake-fade compensation feature (increasing hydraulic pressure with higher brake temperatures), a brake standby feature (gently squeezing the brake pads against the rotors when the driver suddenly takes his or her foot off the gas), and a brake drying feature (removing moisture from the brakes when the windshield wipers are in use).

Two options enhance the handling and driving experience. Active Steering, praised by some for its ability to increase responsiveness, can automatically execute slight steering corrections without driver engagement. The Active Roll Stabilization feature offers an electronically controlled, hydraulically operated system to flatten out cornering at high speeds. Reviewers praise the ride as smooth and comfortable, with no float, though they also note that the standard suspension - front strut and rear multi-link - handles well without any add-ons.

The exterior styling of the BMW 5 Series has been controversial, to say the least, generating a love-hate response from reviewers. While some compare the look of the 5 Series to two halves of separate cars joined into one, others accept the curve of the front end, flat sides, and high rear deck as growing less jarring over time. Xenon adaptive headlights are standard for the 530i trim and higher, with lenses that turn with the steering wheel to direct light around a curve. Adaptive rear brake lights brighten further when the antilock braking system is engaged (although reviews note that its effectiveness relies on other drivers’ correct interpretation of the brightness). 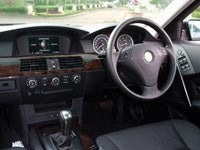 The 5 Series seats five comfortably with adequate support. The interior is billed as offering a comfortable, spacious ride for a midsize luxury sedan, particularly in the back seat. Interior space matches its competitors (e.g., Mercedes E-Class, Audi A6, and Lexus GS), and materials are described as attractive and luxurious to touch.

All of the 5 Series trims offer standard power locks and windows, AM/FM radio, a CD player, cruise control, tilt and telescopic steering, and 14 cubic feet of trunk space (more if the optional fold-down rear seat has been added). The base 525i comes standard with leatherette upholstery, automatic climate control with allergen filtration, and even a rechargeable flashlight for the glovebox. The 530i adds xenon adaptive headlights and the optional sequential manual gearbox. The 550i covers its seats in Dakota leather and provides a universal garage door opener and an interior lighting package, as well as Park Distance Control for parking assistance.

The iDrive system represents one of the few weak links in the 2007 BMW 5 Series. At best called confusing and complex, and at worst, a curse, the iDrive controls a number of functions (including climate control, navigation, and audio) via a giant aluminum knob on the center console between the front seats. The knob operates similarly to a point-and-click mouse, requiring the operator to navigate through layers of menus to adjust the functions controlled by iDrive. Learning the system requires time.

A number of options packages enhance the 5 Series, including a cold weather package with heated front seats and steering wheel, a sport package with Active Steering, larger (18-inch) performance tires, improved braking, and sport contour seats with 20-way adjustment. Technophiles will enjoy the DVD-based navigation package with voice command, as well as the available CD/DVD changer and an upgrade to a Harman Kardon Logic 7 sound system. Additional optional technology includes a head-up display (HUD), which projects information on the windshield. Yet another system controlled by the iDrive, the HUD can include speed, cruise control settings, and navigation instructions. The goal is increased information, but reviews question its safety based on its potential to distract to the driver. 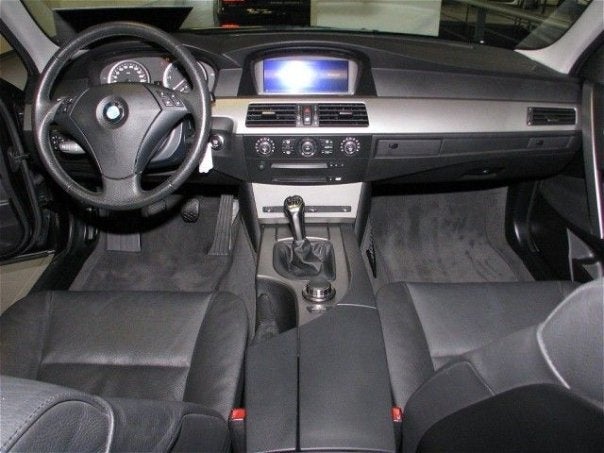 All 5 Series trims include standard driver, front side, and passenger side airbags, with rear side airbags available as a dealer-activated option. A tire pressure monitoring system in the 17-inch alloy wheels and antilock brakes with dynamic brake control are standard for all trims as well. All-wheel-drive trims offer standard Hill-Start Assist and Hill Descent Control for slippery weather conditions.

Owner reviews of the 2007 BMW 5 Series are typically as glowing as the experts’, whether drivers use it as the family car or for daily commutes. The same features are praised, and a few criticized. Great handling, acceleration, power, comfort, and spaciousness fall in the plus category, with a lack of interior storage and the iDrive drawing negatives (although some owners note that the iDrive isn’t as bad as they had anticipated). Louder-than-expected road and wind noise were noted when the sunroof's interior cover is open. Owners who gave their 2007 5 Series BMWs low ratings comment on repeated trips to the service department shortly after purchase (primarily for electronic issues: sensors, batteries, and satellite radio malfunctions, among others). However, those represent a small fraction compared to the number of positive owner reviews.

Users ranked 2007 BMW 5 Series against other cars which they drove/owned. Each ranking was based on 9 categories. Here is the summary of top rankings.

2007 525i Doesn't Always Start When "Start Engine" Button Is Pressed

This issue has been happening for a couple months now, but it was my sisters main car so I never dealt with it personally. She's gone to college so it's mine now. The issue is that not every time I ...

Tries To Start/battery Discharging Too Quick

Tries to start and nothing. Changed ignition coils,spark plugs, gas pump,starter,alternator,voltro... pending. Now I'm having an issue with battery discharging very quickly. So back to beginning it ...

Access To The Inside Of My Car Or The Hood

I lost the keys and the spare key to my 2007 BMW 530i and my battery is dead I'm trying to figure out how can I get in my car or at least pop the hood I don't know if there's a way I can find my ke...