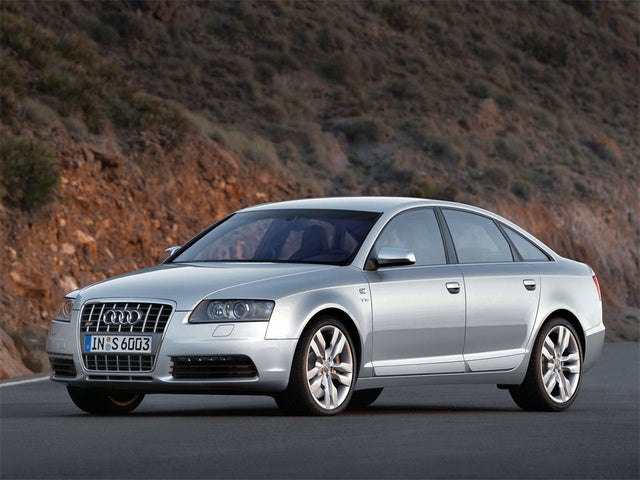 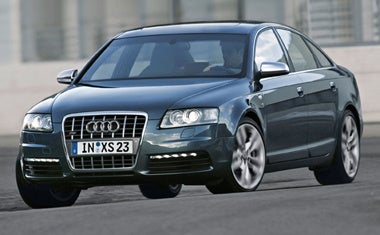 When last on the market in 2003, the Audi S6, a sportier version of the A6, was offered as a wagon only. What a difference four years makes. Back with a vengeance is the 2007 Audi S6, a seemingly mild-mannered mid-size luxury sedan on the outside, but hiding a growling racer with a monster engine under under its hood. The S6 is for those looking for power and driving excitement without losing any of the Audi refinement and elegance.

The 2007 S6 features a detuned Lamborghini Gallardo 5.2-liter V10 engine rated at 435-hp (the previous S6 had a 340-hp V8). With direct fuel injection, this propels the S6 frmo 0-60 in five seconds. It comes only with a 6-speed Tiptronic that has three modes -- drive, sport, and manual (with paddle shifts on the wheel). Naturally, the S6 comes with superior quattro all-wheel drive, a 40/60 front-to-rear torque differential, ABS brakes, traction and stability control, and front-side and curtain airbags for front and rear passengers. On the outside, it looks a lot like the A6, with only subtle nods to its sporty pretentions, such as quad exhaust pipes, a different grille, and more aerodynamic body molding. Its biggest hint to the V10 power lurking beneath it are the two sets of five LED daytime running lights.

Inside, the 2007 Audi S6 doesn't skimp on luxury, so drivers get the best of both worlds: sports performance and upscale elegance. Power everything, heated leather seats, memory settings, iPod and MP3 compatibility, Bluetooth, a sunroof, and an MMI Multi-Media Interface are standard features. There's little not to like about the S6, according to owners and experts. It has good balance and handling, amazing V10 power, and a nice exhaust growl to get your blood boiling. Disappointments include a lack of a manual transmission, some understeer, and a stuttering transmission when in manual mode. There can also be some confusion as to the subtle differences between the S6 and the S8. The S6 has 15 fewer horsepower and no dynamic ride control or adjustable shocks, like the S8.

Users ranked 2007 Audi S6 against other cars which they drove/owned. Each ranking was based on 9 categories. Here is the summary of top rankings.