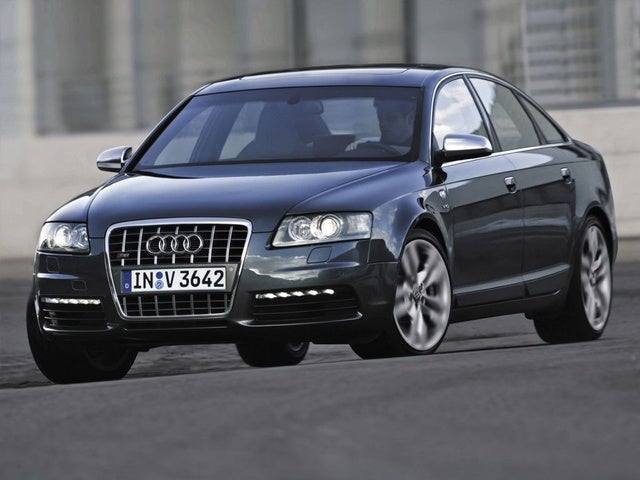 There are few changes to the 2007 Audi A6 mid-size sedan, because very little needed to be improved upon since its 2005 redesign into a larger car. The 2007 A6 is offered in four trims. The front-wheel drive sedan features a 3.2-liter, 255-hp direct fuel injection V6 with CVT transmission. The quattro sedan shares that engine, but with a 6-speed Tiptronic (quattros only come with Tiptronic). The Avant quattro wagon also uses the 3.2 V6. The 4.2-liter V8 sedan gets direct fuel injection, boosting its already impressive horsepower to 350-hp.

New features for the 2007 A6 include improved cupholders, an MP3 player, and an overhead console. The dash features a multimedia interface (MMI) that consolidates controls in one central area. Various packages are available with the already pamperingly luxurious 2007 A6. An S-Line sports package features sports suspension, 18-inch performance tires, and badging. In 2007 it will be offered with the Avant wagon for the first time. A Cold Weather package adds heated seats, headlight washers, and a ski bag. A Technology Package gives you a DVD system, Sirius radio, and rear camera. Without the packages, the standard features continue to amaze A6 owners. Even in base models, you are treated to leather accents, wood trim, 12-way power front seats, and dual climate control. Heated seats are standard in the Avant and 4.2.

Audi enters into 2007 with not only its reputation for quality engineering and interior comfort intact, but top ratings for safety. Its A6 was just named the safest car by the Insurance Institute. Owners love this aspect, but often are attracted to the A6 for its spaciousness, passenger comfort, sleek style, quality of interior materials, and fuel economy. They also like how the Audi handles and grips the road, is easy and smooth to operate. Bluetooth capability is a big plus. Most owners just love to drive their Audi, and with the increased horsepower in the V8, they truly feel as though their behind the wheel of a sports sedan and not just a respectable family car. Negative comments crop up about a confusing MMI, lack of storage space (besides the trunk), and some bumpiness caused by the firmer S-Line suspension.

Users ranked 2007 Audi A6 against other cars which they drove/owned. Each ranking was based on 9 categories. Here is the summary of top rankings.

BoriPapi asked a 2007 Audi A6 3.2 quattro Sedan AWD Maintenance & Repair question about a year ago

Where Can I Find A Rebuild Kit For My Audi

I have a 2007 audi a6 3.2 quattro and I need a rebuild kit for it cause I don't have $$$ to get a new tranny it keeps going into limpmode I did everything I could do but it's still doing the same

JRCraddock asked a 2007 Audi A6 3.2 quattro Sedan AWD Shopping & Pricing question about a year ago

My Rpms Revs Up While Driving And Then Stalls

Today I was driving my car to work and the rpms started to rev up to like 5000 rpm while I was only doing 35mph then wouldn’t move any faster than like 5mph. Occasionally my car will go into limp ...

Engine Cranking But Dose Not Start Some Times

Hi, I have a 2007 2.8 Audi A6 and which occasionally when I try to step down the ESP Fault warning light comes on and the car geos Into Limp mode after turning off the Ingnition and restarting the ca...