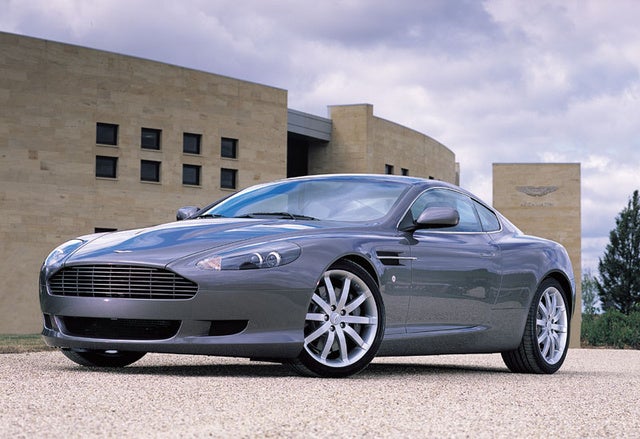 The Aston Martin DB9 will return largely unchanged for this model year with respect to its appearance, but 2007 begins a new era for the British automaker. Aston Martin has revolutionized its production process, relocating to a new technologically advanced assembly plant in Gaydon, England.

Like many of the products from the exclusive British marques, Aston Martin cars are individually handcrafted. While the new DB9 looks very similar to the the previous DB7, Aston Martin touts the car as "new from the ground up." Both the coupe and the Volante convertible variation are built upon a special new chassis, specifically created for GT performance, which uses an incredibly light bonded aluminum construction. Other panels and parts are built from the same aluminum, or in some cases, lightweight magnesium alloy. The result is a remarkably light weight weight for this well-equipped V12-powered sports car.

The two available models are the DB9 coupe and DB9 Volante convertible. Each is powered by a 6.0-liter, all-aluminum V12 that produces 450 horsepower and 420 pound-feet of torque. The DB weighs just over 3,700 pounds, and boasts one of the highest power-to-weight ratios in its very exclusive class. Both DBs can be had with six-speed automatic or six-speed manual transmission. The automatic transmission version gets steering wheel-mounted paddle shifters.
The most direct competitor for the DB9 is probably the Bentley Continental GT. The Mercedes SL is far more affordable.

AstonDb9 I have owned the 2007 db9 sport pack for over a year and drove 10K miles in it on long and short trips , mostly california coast . First of all , its an rewarding experience in any way and dimension you can imagine. It wont be perfect it hand made and its British . But put your good light suit and jump in , then see how it turns you in instant celebrity everywhere you go. How much respect you will get from other drivers and always positive comments. Yes eats fuel who cares who buys aston martin , yes could handle better but its huge gt car not 911. Could be little faster but 4.5 sec in couple is just enough to scare you . Sounds amazing , looks better than 90% cars now on the roads. Maintenance isn't cheap but its 1/3th of Ferrari costs and cheaper than Bentley by half. My 950w sound system is superb. Issues: Breaks from will go each 10k , mid service oil change and fluids cost 1700 Subwoofer start cracking , super low front bumper mainly due to sport pack. Recommend enforce on the bottom of bumper with plastic pads - i have it Recommended use clear bra on the whole front of the car - wrap it . Don't drive in jeans on long trips Check oil once a week

Have you driven a 2007 Aston Martin DB9?
Rank This Car