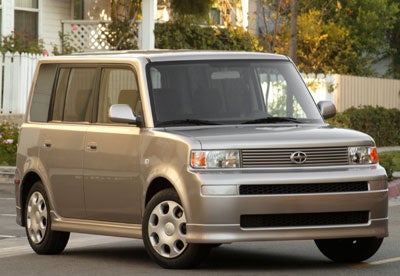 Car in good condition; very clean. Still learning how to use the audio system. Like the anti lock brakes, back up assist and fog lights. Quick acceleration. Controls are easy to locate and use. Ov... Read More

This car is in a class by its self. Best feature for me is low deck height for lifting heavy objects to put into the back of the car. My previous Xb got very good gas mileage. Very roomy and a fair ri... Read More

I love the Scion XB in general. This is the best car I have ever driven. I don’t care about all bells and whistles. I like the way I can sit (not on the floor). I haul furniture in it. I have moved h... Read More

This is the 4th Scion xB we have purchased for our company. Too bad the model is no longer available. Read More

Scion xb is a very dependable car. We had ours for 11 years and it still runs great! Read More

No key fob. One key only. Tires are new. Car and Driver floor mats! Love that! The AC is colder at the 3rd setting. Gonna get that check. Overall, any used car buy is a crapshoot. But I’m familiar wit... Read More

Really there is not much that i don't like about this car. The interior is a little soft, so it has a few scratches. The color is great. I handles so well, its higher off the ground, but handles great... Read More

i have fancy for scion xb love them. Great reliable cars. Hay its made by Toyota. Read More

I like that car and I think its good price on this days. Read More