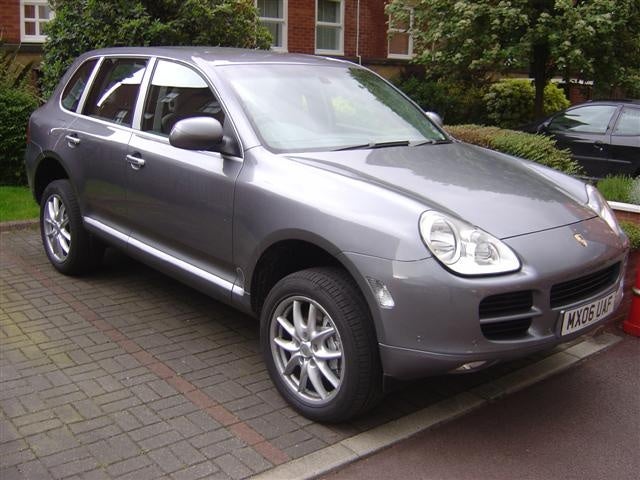 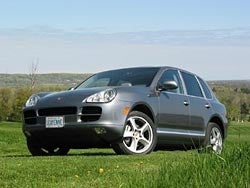 The Porsche Cayenne was available in a wide range of trim packages for 2006, with four engine options. The base Cayenne was powered by a 3.2-liter V6 that produced 250 horsepower. Stepping up a notch, a 340-horsepower, 4.5-liter V8 was dropped under the hood of the Cayenne S and the Cayenne S Titanium Edition. A turbocharged 4.5-liter V8, producing 450 horsepower, provided power for the appropriately named Cayenne Turbo, while the top-of-the-line Cayenne Turbo S, new for 2006, pumped up the power even more with a turbocharged 4.5-liter V8 that produced a whopping 520 horsepower.
A six-speed manual transmission was standard on the base Cayenne, while a six-speed automatic was optional. For all other models, the six-speed automatic was the only transmission available.
All models featured all-wheel-drive, as well as power windows, 12-way adjustable power front seats, a multi-function steering wheel with controls for the audio system, heated windshield wiper nozzles, leather seats (heated in the front), cruise control, a central locking system with remote, front and side airbags, and an AM/FM radio with a CD player.
The S Titanium Edition added a sunroof, while the Cayenne Turbo and Turbo S added a Parking Assist system, heat-insulating laminated glass, and a 14-speaker Bose sound system, among other features.
Off-road, the Cayenne offered an 8.5-inch ground clearance with the steel suspension and air suspension at normal level, and a 10.7-inch ground clearance on models equipped with the air-suspension system at off-road ride height.
Drivers praised the Cayenne's acceleration, tight handling, roominess, and comfortable seating. In addition, drivers liked the Cayenne's six-speed manual transmission. However, the six-speed automatic was a bit controversial, especially with reviewers, who noted that it tended to accelerate the vehicle even when the foot was held constant on the gas pedal. The six-speed also could be a bit jumpy on downshifts, reviewers noted.

What's your take on the 2006 Porsche Cayenne?

Users ranked 2006 Porsche Cayenne against other cars which they drove/owned. Each ranking was based on 9 categories. Here is the summary of top rankings.

Have you driven a 2006 Porsche Cayenne?
Rank This Car

What Is My Oil Pesure Normal Reading On My Porche 2006 Cayenne S.

In anyone’s opinion would this vehicle have inherent problems? Asking 26k is this good value

Wow I didnt know that on here you cannot test drive their car and then ready to buy it in and was thinking of closing a deal on a Porsche Cayenne, not gonna say his name, Edward, I asked him if I c...

Porshe Cayenne 2006 Who Is The Best Mechanic

195 views with 3 answers (last answer about a year ago)