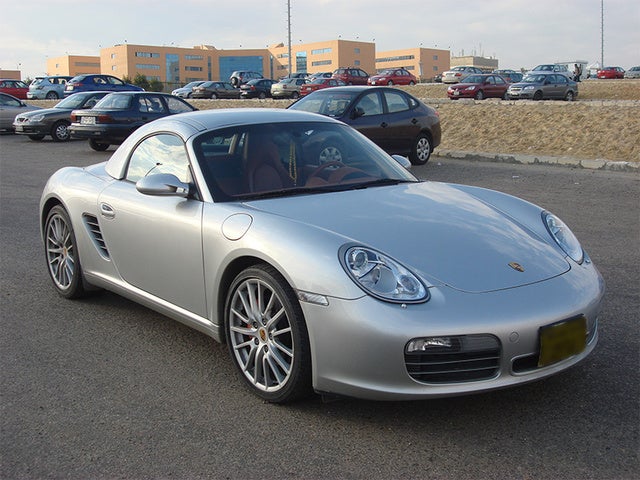 Having redesigned its popular Boxster mid-engined roadster the previous year, Porsche added only a few upgrades to the 2006 models, as well as a few new items to the options list, such as a tire pressure monitoring system, advanced two-stage airbags, and a number of add-ons to the optional navigation system.
The open-top Boxster was available in two models for 2006. The base convertible received a 2.7-liter, flat six-cylinder engine that produced 240 horsepower, while the Boxster S was powered by a 3.2-liter six-cylinder that produced 280 horsepower. Both engines were located behind the passenger compartment but ahead of the rear axle, hence the mid-engine designation.
The base Boxster came with a standard five-speed manual transmission, while the Boxster S was equipped with a six-speed manual transmission. A five-speed Tiptronic S automatic transmission, with a gate for manual shifting, was available as an option for both models.
Standard features for the base Boxster included air conditioning, power windows, power steering, power door locks, leather seats (power adjustable in the front), a leather-wrapped steering wheel with a tilt/telescoping column, a trip computer, power heated exterior mirrors, an anti-theft alarm system, cruise control, and an AM/FM stereo system with a CD player.
Anti-lock brakes, traction control, stability control, Macpherson struts, and 17-inch alloy wheels with performance tires were also part of the package.
In addition, the Boxster was equipped with a lightweight, sound-insulating convertible top with a heated glass rear window.
Among the Boxster's assets, as noted by drivers, were its responsive handling, its ability to hug the road at high speeds, the easy-to-read instrument panel and dials, the sports-car exterior design, and the interior styling. Some drivers were less than impressed with the Boxster's stereo system, however. And drivers noted that while storage space in the vehicle was limited, it could be adequate with a little creativity when packing.

What's your take on the 2006 Porsche Boxster?

Have you driven a 2006 Porsche Boxster?
Rank This Car

I Have A Dead Battery And Need To Open My Frunk. I Do Not Have A Terminal I...

I can't use the electrical method to open the frunk as there is no terminal. I assumed this was standard equipment for all 987 Boxster S. Is this incorrect?

632 views with 3 answers (last answer about a year ago)

Check engine light is yellow and exclamation mark is Red. What does the red mark mean? Should'nt they both be yellow on an minor problem? Had it checked and was only a gas cap problem.

I Am A Private Owner. Can I Use This Site To Sell My Car???

Check Engine Visit Workshop Light Came On. What May Be The Problem?

My 2006 porsche boxster was just repaired with new water pump, brakes and 80k mile check up. Check engine light visit workshop light came on. What may be the problem and should I have it towed to th...