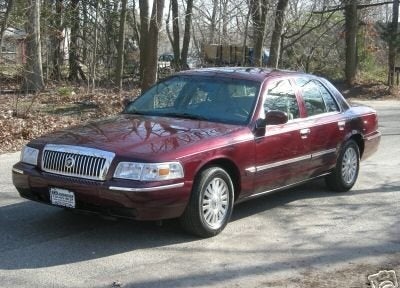 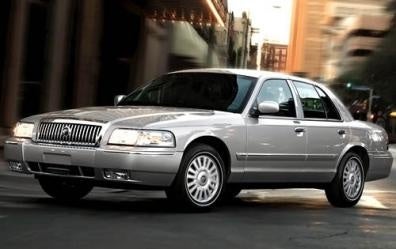 The twenty-six year old Grand Marquis, after a number of upgrades and makeovers, remains Mercury's best selling car. Based on the venerable Ford Crown Victoria, both cars are throwbacks to the era when the American highway cruiser ruled the roads in America.

With its 212 inches overall length, riding on a 114.6-inch wheelbase, the Grand Marquis has earned five-star safety ratings for the past ten years. Reviewers recommend the optional 239-hp V8, available with the LS trim line, which includes the handling package: a different rear-axle ratio for better acceleration, rear stabilizer, rear air suspension (a self-leveling system), and aluminum wheels; and the traction control option for snow country.

These options help, but do not overcome the car's barge-like handling. The Grand Marquis adequately handles round the town jaunts hauling the kids sports equipment one owner commented that he found the Grand Marquis a better option for his family than a mini-van. An adequate highway cruiser in small doses, reviewers and some owners faulted the bolster-less seats for fatigue after three hours of steady driving. Other owners liked the floating, large car feeling comparing it to Cadillac and Lincoln rides. Reviewers, however, were not so easily impressed.

Neither were they impressed with the average 17 mpg, though one owner claimed 26-27 mpg on the highway. While owners enjoyed the interior roominess for six adults and large trunk, others cited the interior's poor ergonomics, lackluster sound system, and wind noise. One owner's son summed up the Grand Marquis when he equated the driving experience to being the captain of the starship Enterprise - ah, the good old days.

What's your take on the 2006 Mercury Grand Marquis?

Daniel One of the best rides. I used to own a 81 cutless broughham. Nice rides

Have you driven a 2006 Mercury Grand Marquis?
Rank This Car

Instrument Cluster goes Out during acceleration and resets during braking. All Gage's A/C Controller and Blower, Dash Lights

398 views with 3 answers (last answer about a year ago)

How Do I Program My Key Fob?

I can get my car into programming mode after turning the key back and forth 8 times and leaving it in the on position. The doors lock and unlock to verify entering program mode. But when I press a ...

After shutting door, dome light won't turn off and stays on even. Manual says it might take 45 minutes to shut down if condensation has occurred. This morning the windows were wet from temperature...

Got a 2006 LS GM just passed the 144k mark and it's got a few problems. We didn't take good care if it like we should have. From what I know, it needs a head gasket, coil packs, injector (just one,...

18 views with 7 answers (last answer about a year ago)