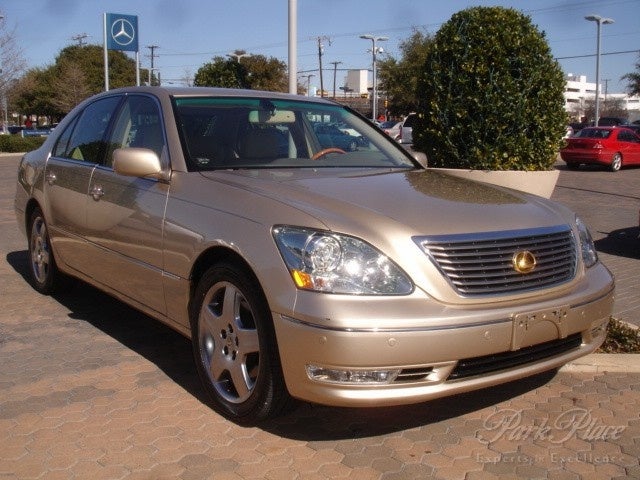 The Lexus LS 430 remained unchanged once again for 2006. The 430 had emerged five years earlier, replacing the LS 400, and its styling and features were revamped again in 2004. This was the final year of the flagship sedan's third generation, as Lexus would unveil the totally redesigned and technologically superior LS 460 in 2007.
The LS engine was a four-cam 4.3 liter aluminum V-8, and boosted further by Variable Valve Timing Technology + intelligence. VVT+i not only increased horsepower, but it also reduced emissions and improved fuel economy. The LS 430 had a curb weight of nearly 4000 pounds and a body that would not be described as especially athletic or aerodynamic. However, the LS rocketed from 0 to 60 mph in six seconds, and it turned the quarter mile in 14.8. The powerful engine was teamed with an electronically controlled six-speed automatic transmission. The LS 430 required premium fuel and consumed it at a steady rate. Yet, considering its weight, shape, and power, the 18/35 mpg rating could have been worse. Some drivers observed a higher mpg average in varied driving.

Drivers found the LS ideal for road trips. Long hours on the road were very manageable thanks to a fine combination of interior room, cargo space, reasonable gas mileage, and a smooth ride. Regardless of driving speed, within reason, drivers found that the cabin remained well-protected from uneven surfaces, and wind/road/engine noise.

How To Repair Of Parking Sensor

525 views with 6 answers (last answer about a year ago)

How Do I Buy With Cash?

how do i purchase a vehicle with cash?

I have sold my car as of today to a buyer who came to me through Cargurus. The sale is now final and complete. I have a Cashier's Check from the buyer for the sales price of $13,250.00. I have signe...