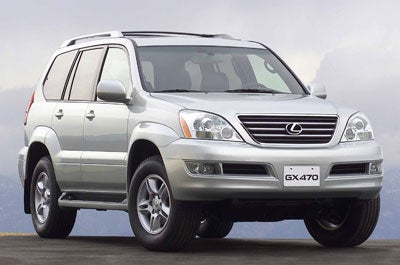 After two years of significant improvements, the GX 470 remained unchanged for 2006. The GX continued its very successful ride atop the rugged Toyota 4Runner platform, sturdy body-on-frame construction and full time 4WD. The GX had offered luxury SUV shoppers a unique new choice, by blending Lexus luxury, a sedan-like ride, and off-road prowess into this attractive package. The GX 470 sat on a tier between the more affordable car-based RX 330 and the flagship full size LX 470.
The GX was powered by a 4.7 liter 270 horsepower V-8. With 320 pound-feet of torque, the GX was able to tow 6500 pounds-nearly a ton above its curb weight. The GX accelerated from 0 to 60 and 8.1 seconds, and its powerful brakes returned to a stop in about 130 feet. Like the 4Runner, the GX utilized a heavy duty truck construction which offered a more stable and solid trail experience. Like the more expensive LX, the midsize SUV included abundant standard features that you would not find in many equally capable 4x4s. Leather seats, maple wood trim, power/heated front seats, a moonroof, and automatic climate control were all included. The standard Mark Levinson stereo system has an in-dash six disc CD changer heard through eleven speakers.

While praise continued for the GX 470, many who had previously owned a full size SUV found the third row of seating very cramped. The GX also featured the 4Runner's swinging rear door, instead of a wagon-style lift gate. Some found this aspect annoying when loading the storage area from the hinge side.

GuruJ2DXX Outside North America this is the Land Cruiser Prado. Find one that’s well maintained and buy it. They are a phenomenal value.

I've recently had this problem where the electronics on my dashboard start going haywire on my 2006 Lexus GX 470. I recently replaced the battery, and took this in to a mechanic who thought it was ...

I saw where another guy had written that this happened to him and someone write back and suggested the manual but does anyone have any suggestions other than the manual I do not have the manual...

I Have Had Three Lights Come On The VSC, VSC Off & The Skid Control Light. ...

I read in the book that it doesn't hurt to drive, but what needs to be done?

My Truck Died Completely,starts Up After Jump And Dies Down.the Computer Sc...