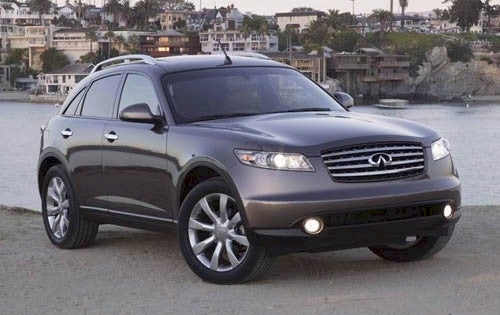 Infiniti's popular crossover houses a 3.5 liter V6, which produces 280 horsepower and 270 pound-feet of torque. The V6 is paired with a five-speed automatic transmission with a manual mode. Fuel economy is estimated at 17/23 mpg. The FX 35 is available with either rear-wheel or all-wheel drive. The AWD system automatically routes power to the wheels with the best traction.

The FX has received considerable acclaim for its car-like agility. Infiniti's crossover SUV continues to be a class leader in both acceleration and handling. The V6 FX will speed from 0-60 mph in just over seven seconds, and the manual mode transmission can minimize downshift delays.

The FX's sleek appearance sacrifices rear visibility, rear head room, and ease of access to the rear seats. Drivers have commented that the FX fuel economy could be better, and testers reported mixed driving fuel economy in the mid teens.

Brake/tail Lights And Blinkers! Were Stuck On So I Pulled The Fuse When I P...

Brake/taillights were stuck on so i pulled the fuse when i put it back in nothing comes on now!! And the blinker lights on the dash are blinking real quick

178 views with 2 answers (last answer about a year ago)

What can we do to sell my car faster? I need to sell it as soon as possible.

Is A Good Deal To Take An Infiniti FX35 With 59k Miles On It?