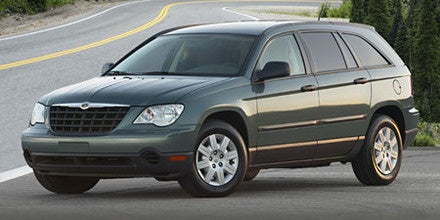 Rooted in a late-nineties concept vehicle, the Pacifica SUV went into production in 2004. Chrysler's first SUV was a unique crossover, sharing a platform with the Town & Country minivan. Exterior styling was freshened for 2006, and more significant changes followed in 2007.

There are six Pacifica variations available in 2006, through three trims each offered with front or all-wheel drive. The base model is well-equipped, with full power accessories, keyless entry, and a CD audio system. The Touring upgrades include third row seating, second row captain's chairs, a power driver's seat, and automatic climate control. The top shelf Limited adds a power rear gate, heated leather seating, and a moon roof. Options include a navigation system, rear seat DVD entertainment, and an Infinity sound system upgrade.

All 4WD Pacifica models house a newer 3.5 liter V-6, good for 250 horsepower and 250 pound-feet of torque. The front-wheel drive base model is powered by a less-refined 3.8 liter V-6, which generates 210 horsepower. Both engines are paired with a four-speed automatic transmission. Fuel economy is estimated at 17/23 mpg for the 3.5 liter engine.

What's your take on the 2006 Chrysler Pacifica?

Demetries I just bought a 2006 Pacifica that just hit 100k, when I say I absolutely love this vehicle...this is my "suv" I have driven other trucks but nothing i can compare to the pacifica. i'm 6'1 and leg room is always a issue for me, i sat in the back seat it was plenty of room and space. I love the way it drive, gets up to speed. Only thing I don't like is the lack of storage space the vehicle has in arm/eye reach. possible the gas mileage. I am use to going bit of a distance before the gas needle moves, but hey its a SUV so I will take it as it is.

Have you driven a 2006 Chrysler Pacifica?
Rank This Car

Why Is My Car Leaking ?

I replaced the right front turn signal bulb and still didnt work I checked for power at the socket with a test light and it has power but when I install the bulb it dont blink and marker dont light...

181 views with 4 answers (last answer about a year ago)

My 2006 Pacifica is over heating even when the radiator fan is on . Is this a thermostat issue , water pump issue , or something else ?

The check engine light is on and wont stay off. I have had it looked at and they say they have no idea what is wrong with the car. it runs and sounds great. and it keeps giving different codes. Sugg...