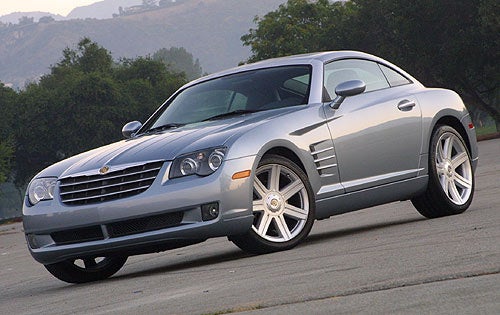 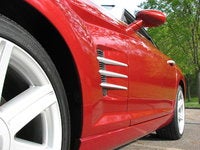 The 2006 Crossfire was carried over from the previous model year, but Chrysler would not offer the Crossfire in 2007. A separate high-performance model, called the Crossfire SRT-6 was also discontinued after 2005.

This year, Chrysler continued with two trim levels, but the Base model was renamed the Standard. There are four models, two coupes and convertibles, ranging in price by almost $6000.

All four models house a Mercedes-engineered 3.2 SOHC liter V-6, which provides 215 horsepower and 229 pound-feet of torque. A six-speed manual is the only transmission choice on the Standard trim, while the Limited is available with a five-speed automatic. The Crossfire speeds from 0 to 60 mph in 6.8 seconds, and drivers can expect mixed driving mileage around 20 mpg.

What's your take on the 2006 Chrysler Crossfire?

Have you driven a 2006 Chrysler Crossfire?
Rank This Car

I was wondering if there was a recommended size of wheel and tire that could be installed on a Crossfire that would allow tire rotation from front to rear, i.e. having the same size tire on both front...

I have a 2006 Chrysler crossfire, runs great. Took it in for emission test, and did not pass because the car computer needed to be reset. I was told by Chrysler that car needed to be driven and it wou...

Have There Been Any Recalls On 2006 Crossfires

Whats Wrong With My Chrysler Crossfire

Something Is Draining The Battery. When The Car Is Off It Is Still Pulling ...