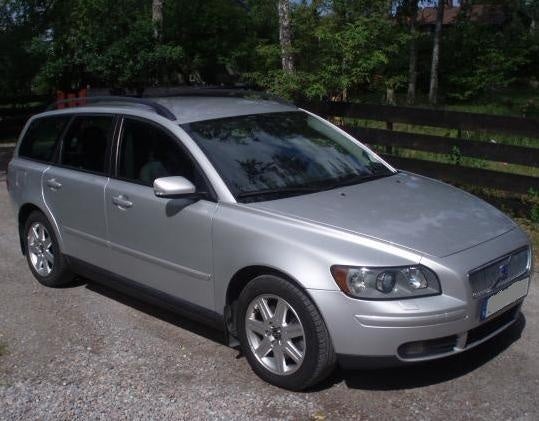 Volvo's junior station wagon returned for 2005 completely rejuvenated, from the wonders of the patented Intelligent Vehicle Architecture right down to the new name. That's right - the V40 grew up and became the V50, although it remained the little sibling of the best-selling Swedish wagon, the V70.
And that was just fine with many a car buyer whose needs were nicely met by the V50. Those who did not need any more cargo room or towing capacity were happy to save a few thousand on the slightly smaller car. After all, the safety factor was the same, with air bags, ABS, traction control, and protective side beams among the numerous standard features.
Base model V50 owners don't enjoy a fuel economy edge over base model V70 owners, as the two wagons use the same engine, a 2.4-liter, 168-horsepower number without benefit of a turbocharger. Some drivers were left craving some additional power, but they had their chance on the car lot, as the T5 trims deliver 218 hp with a turbocharged 2.5-liter engine.
North Americans had to be patient to get behind the wheel of this car, which had been available in Europe for about 10 years previous. Many feel it was worth the wait, as they appreciate the design (such as the wonderful slim center console) and performance improvements.
But some of the most important changes occurred way behind the scenes with the previously mentioned Intelligent Vehicle Architecture - advancements were made in the car's frontal structure, resulting in improved deformation zones to further protect occupants in a collision.

My Car Alarm Gets Set Off At Least Every Other Day.

Is it that hyper sensitive? Is the alarm going off frequently a symptom of something more?