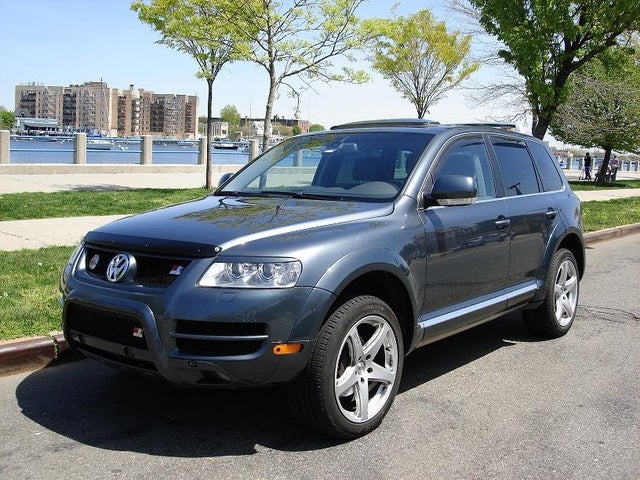 Volkswagen made a few minor adjustments to its Touareg SUV for the 2005 model year. For starters, the V10 turbodiesel option was discontinued, so the Touareg was available only with a V6 or a V8 gas engine (not that that's a bad thing). Horsepower for the 3.2-liter V6 was increased from 220 to 240 hp. Both engines were linked to a six-speed automatic transmission.

In addition, the suspension was lowered a bit (on trims without the optional air suspension) and a full-sized rear-mounted spare tire was added. Satellite radio capability and a self-dimming rear-view mirror were also new for 2005.

Drivers felt the Touareg's ride was firm and its handling was responsive, and that it was especially smooth to drive at highway speeds.
The vehicle's luxury amenities and styling were also cited as positive points. Negatives included the fact that the SUV was "very thirsty" and that the six-speed transmission had "overly short gearing," which sometimes made for jumpy shifting, especially on downshifts.

What's your take on the 2005 Volkswagen Touareg?

Have you driven a 2005 Volkswagen Touareg?
Rank This Car

My VW touareg stock in sport

my vw toureg 2005 is very high from the front and I can not see well, how I make it a low front

Hello all I have a 2005 VW Touareg, it runs well but in the summer I have a problem with the cooling system. Everytime I park it in the sun and the dash gets hot my AC won’t work until it cools ...

Where Is Battery Located On Car