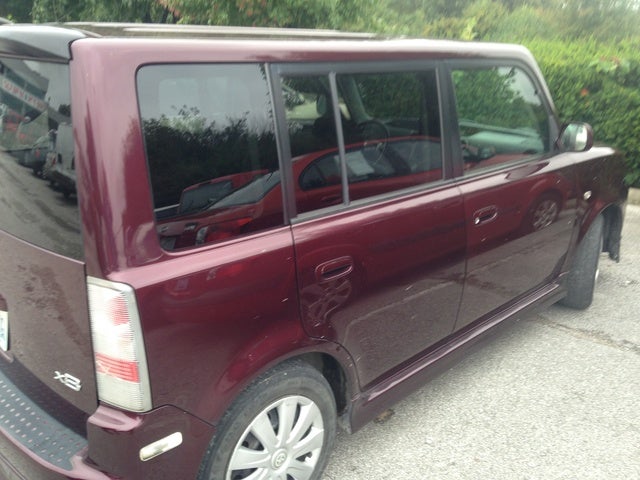 Scion xB production and availability expanded in 2005, but there were no significant changes for this second year of production. The xB and xA were joined by a new model this year, the tC coupe. Scion's unique and bold styling, especially with the xB, has attracted many new prospective buyers to the Toyota lot, but the Scion sales experience has been instrumental to the company's rapid success.

The xB is surprising well-equipped for its price, and despite a myriad of available dealer installed upgrades, it would be a challenge to create an xB that even comes close to $20,000. Standard features include keyless entry, full power accessories, a Pioneer CD audio system with MP3 compatibility, air conditioning and privacy glass. The list of safety items includes ABS, stability control and traction control. Customization options include a subwoofer, back-lighting kits, satellite radio, spoilers and body moldings, sport pedals and various shift knobs.

The xB is powered by a 1.5 liter DOHC inline four, mated to a five-speed manual transmission. A four-speed automatic optional, but many reviewers suggest that the manual makes for a better driving experience (improved acceleration). The Variable Valve Timing-enhanced engine supplies the 2400 pound xB with 108 horsepower and 105 pound-feet of torque. Fuel economy is estimated at 30/33 mpg, and Scion claims a 0-60 mph time of nine seconds.

By now, first year Scions have accumulated some mileage, and complaints about reliability and durability are incredibly scarce. Owners have also been very satisfied with the Scion service experience, along most report no service needs aside from oil changes and tune ups. Interior flexibility was common favorite feature: the back seats folded flat to allow for over 40 cubic feet of cargo space. Owners and reviewers agree that although the Scion is quite affordable, Toyota's impact on engineering, build quality, efficiency and comfort is very apparent.

ReidC2 My first xb was a 2004 manual transmission with 116,000 miles on it when purchased. It had a salvage title due to the prior owner ran into the back of her commanding officer while texting (when it had 70k miles on it). The airbags deployed and approximately $1200 to repair the front end. She said she bought it back from the insurance company and had it repaired and airbags replaced. I paid $2600 for it in 2010 when it had 116k miles on it. Other than replacing the rear shocks and oil changes, it ran like a champion and fun to drive. I'm 6'7" tall and was comfortable. It was purchased for a commuter car since my new job was an hour drive to and from work. I averaged 30-32mpgs. I sold it 3 years later since my job transferred back to my home town. Biggest mistake I ever made, wishing I still had it. The only thing that I didn't like was changing gears in bumper to bumper traffic. After searching high and low, in 2015 I found a 2005 xb with automatic that had 235,000 miles. It had a clean 2 owner prior carfax history and the test drive revealed no issues. I bought it for $2300 (praying I didn't make a bad purchase with the excessively high miles). After slapping on new brake pads and rotors, an engine tune up & oil change (approx $650) I currently have 243,000 miles on it with no issues to report. My friend who happens to be a good mechanic is very impressed with it with respect to the high mileage and mechanical condition. I am averaging 26mpg in the city and 30mpg on the highway which is incredible considering it's age and mileage and being an automatic. If I could add one feature, it would be cruise control. I believe it can be added, but if you go through the Toyota/Scion dealer, it's going to be expensive. I've found on eBay that there is an aftermarket cruise control kit for roughly $200. That will be my next purchase soon. I have installed an new radio/mp3 player and added a bazooka amplified subwoofer. The factory speakers sound great. When I drive my xb, I feel like I'm in a regular size vehicle until I pass by another xb and see it is a small car. It is huge on the inside and as stated before, it is fun to drive. The newer body style xb's (2008-up) unfortunately installed the gear shift in the center of the dashboard which doesn't agree with my long legs. Everyone I know that has an xb feels the same as I do, they absolutely love it. I am 50 years old and have previously owned over 13 different make and model cars, by far this is the best of them all. It may not be luxurious or be the hottest car on the market, and if you don't put so much emphasis on having all the "bells and whistles" , this is the car for you. I will keep this vehicle until I leave this planet. Lastly, replacement parts are not expensive and actually pretty simple to install. If your thinking about buying an xb, Buy it!!

Users ranked 2005 Scion xB against other cars which they drove/owned. Each ranking was based on 9 categories. Here is the summary of top rankings.

Am I really gonna get better performance from my car using an Eccel ignition coil over an OEM replacement coil. I can get 4 OEM for $100 dollars down the street today. I can get 4 Eccel's for $200 dol...

about a year ago my vsc, trac off, and check engine lights came on and i took it to the dealer and they repaired it. within 8 months the lights came on again. is this a known problem or am i just lu...

ck eng lite on vsc lite on trac off on

I purchased a " GENUINE TOYOTA CAMSHAFT TIMING CONTROL VALVE OEM PRIUS SCION YARIS 15330-21011 " on ebay. And part arrived yesterday. The box is opened but obviously genuine. I checked the pa...

Can I Trade My Wrecked Car In?

I wrecked my 2005 Scion xB and it's about $1400 worth of damage. It's paid off so I was wondering if I could trade it in at a dealership?