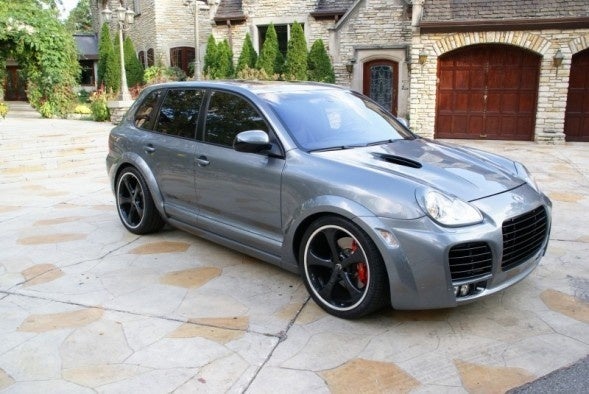 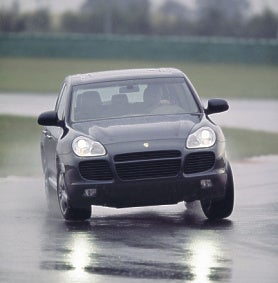 In its third year of production, the all-wheel-drive Porsche Cayenne SUV was available in three trim packages for 2005. The entry-level base Cayenne was powered by a 3.2-liter V6 engine, which produced 247 horsepower. Stepping up a notch, the Cayenne S received a 340-horsepower, 4.5-liter V8, while the high-end Cayenne Turbo came equipped with a turbocharged 4.5-liter V8 engine that pumped out 450 horsepower.
For the first time, a six-speed manual transmission was added to the standard equipment list for the base Cayenne. The manual transmission included Porsche's Drive-Off Assistance system, which provided automatic braking on steep slopes until the driver engaged the clutch and transmission.
A six-speed automatic Tiptronic transmission, with a gate for manual shifting, was standard on the Cayenne S and Cayenne Turbo models and optional on the entry-level model.
Standard features for the Cayenne included air conditioning, power windows and door locks, leather seats with power adjustments in the front, a full array of airbags, cruise control, a leather-wrapped steering wheel, a powered rear tailgate, and an AM/FM stereo system with a CD player. Options included a power sunroof, wood trim, and a CD changer.
Many drivers liked the Cayenne's new manual transmission, noting that it was a good replacement for the automatic transmission, which some drivers considered problematic -- not to mention the fact that the manual gave drivers a better feel for the vehicle. The Cayenne's responsive handling, firm suspension, smooth turning ability, comfortable interior, and safety features were also cited as positive points by drivers.

What's your take on the 2005 Porsche Cayenne?

Todd That truck isn't for sale.

Have you driven a 2005 Porsche Cayenne?
Rank This Car

Porsche cayenne 4.5 S 2005 My battery was low and i charged it after that i can't turn on the car,my brake is hard,wheel wont move and STEERING FAULT yellow lamp showed up I dont know how to solve...

Are There Inherent Problems With A Porsche Cayenne

Thinking of buying an older Porsche Cayenne S with 94K miles. Are there any issues with these vehicles?

171 views with 2 answers (last answer about a year ago)

I have always wanted a Porsche. With a larger family and winter coming, i want an SUV. And I passed a Ceyenne that seems to be what I need and want, and cheap. Seems too good to be true.....

I was wondering if you could classify a 2005 Cayenne S a classic? I wanted to ship mine from Canada to the Caribbean, but the island have certain age rules.