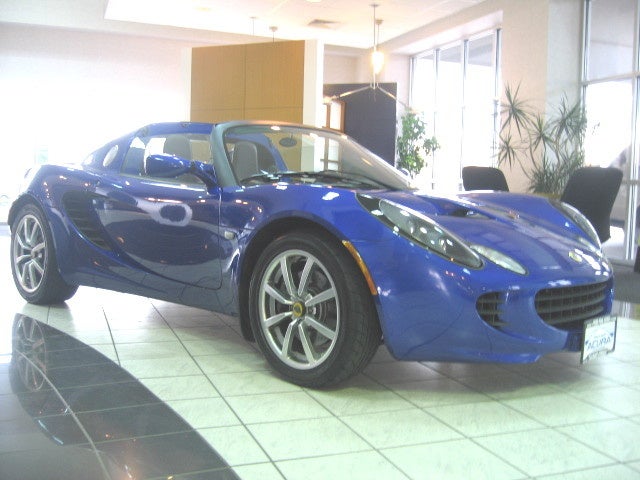 It was eight years before Lotus began compliance with U.S. safety standards to allow the Elise into the U.S. market. The 2005 Elise gained instant fame as a sports car tour de force among performance car aficionados. It set a 600-foot-slalom course production car record in one high profile review - the Porsche Boxster S swooshed around the cones for an average 70.9 mph, while the diminutive Elise ripped a 73.2 mph average. Its skidpad performance bested both the Boxster S and the Corvette Z06, trailing only the $193,000 Ferrari Challenge Stradale, which it bested on the slalom course - a David among Goliaths.

With a 12.5-foot length, 5.6-foot width, and 3.6-foot height weighing a svelte 1,979 lbs. it doesn't take much to make the Elise perform. A Toyota 1.8-liter, four-cylinder engine sits behind the aluminum tub formed cockpit. Lotus modified the basic Celica GT-S engine with new intake and exhaust systems and its own engine control electronics. Producing 190 horsepower at 7,800 rpm and an 8,500-rpm redline, Lotus claims 0-60 in 4.9 seconds topping out at 141 mph.

That weight advantage also provides the Elise with its gas mileage rating. EPA rates it as 23 mpg city, 27 mpg highway. But with a 10.6 gallon gas tank you won't get very far with a heavy right foot. Cockpit seating is tight. The passenger seat doesn't move - no adjustments, while the driver gets a little more space and adjustments. There are airbags, air conditioning, and anti-lock brakes. Both occupants could enjoy the luxury of the touring option, which "boasts" full leather seating, power windows, insulated soft-top, additional sound deadening, and carpet.

One reviewer claimed the Elise was for "divorced dads" looking for weekend sports car recreation. Perhaps, but I've seen retired couples at autocross sharing the fun of playing Davids among the Goliaths.

Have you driven a 2005 Lotus Elise?
Rank This Car

How Does CarGurus Make Money? Does The Seller Or The Buyer Pay?

I am a possible buyer. I live 150 miles from seller. I need to have a conversation with the seller to set up a meeting, an inspection and a test drive with a goal of buying the car in one trip (with...

Is It Reasonable To Buy A Car That Has A Salvage Title But Has Been Complet...

I Need A Good Mechanic For My Lotus In LA. Any Suggestions?

I need a good mechanic for my Lotus. I also need a good auto body shop for the same car. Any Suggestions?