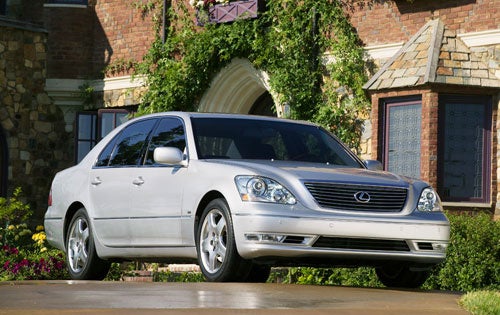 After several significant updates for the previous model year, the LS 430 was unchanged for 2005. The only piece of news is the 18-inch alloy wheels, previously included with the Sport Package, were now available as an individual option. 2005 marked the 16th year of production for the Lexus flagship. The LS, steadily building upon its reputation for ride quality and reliability, had now become a technological marvel as well.
The LS 430 was supplied with 290 horsepower and 320 pound-feet of torque, courtesy of a highly evolved four-cam 4.3 liter aluminum V-8, and boosted further by Toyota TRD's Variable Valve Timing Technology + intelligence. VVT+i not only increased horsepower, but it also reduced emissions and improved fuel economy. The result was a 4000 pound full size sedan that traveled from 0 to 60 mph in 6 seconds, while consuming fuel at the reasonable rate of 18/25 mpg and earning an ultra-low emissions rating. The LS retained its RWD drive-type, and a new six-speed automatic transmission had been added in 2004.
Many buyers had shopped around the European luxury market before driving away from the Lexus lot with a new LS. Along with a lower sticker price than most German and British competitors, the LS also offered a smoother and quieter ride, according to many owners. Criticism for this flagship is generally hard to come by, but on a very close examination, Lexus was still holding on to an awkward and intrusive cup holder design and the operation of some controls provided a challenge while driving.

Caylee2014 Love Lexus for the quality, longevity, and resale value, all wrapped up in a luxurious, gorgeous, timeless, package.

wandering if the ls 430 has a belt or chain

After Charging Battery, Navigation, Radio And Air Didn't Com On.

Car had been sitting for a while, and the battery went down. After charging the battery, the navigation, radio and air didn't come on.

We have to leave our car unused for 6 months. What should we do in preparation for this.

We own a 2005 LS 430 with Nav. Today it was working fine then a screen showed up saying Please Insert CD. Then some japanese writing below that. I do not know where the CD to the Nav is much less w...