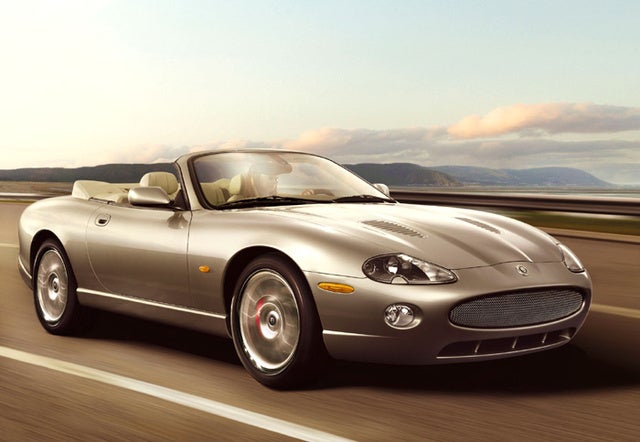 The Jaguar XK-Series received some minor exterior styling updates for 2005, which freshened up a design that had been around since 1996. And even though the current generation was nearly 10 years old by the time the 2005 XK-Series rolled into showrooms, it didn't feel dated, because of its contemporary sports-car lines and luxury interior appointments. Some critics and reviewers even considered the XK-Series a work of art.

For 2005, the XK-Series consisted of the XK8 coupe and convertible and the XKR coupe and convertible. Jaguar dropped a 294-horsepower, 4.2-liter V8 under the hood of the XK8 models, while the XKR models received a supercharged version of the same engine, pumping its horsepower up to 390. All models were available only with a six-speed automatic, which limited the sportiness of the vehicles, according to some drivers and reviewers. A manual shifting option was provided by the transmission's J-Gate.

The interior of all XK-Series cars was definitely upscale, with lots of leather (seats and steering wheel) and burled walnut (steering wheel and interior trim). Some found the seats a bit flat and unsupportive, a criticism that dated back to this generation's introduction in 1996. In addition, a lot of interior refinements, like the steering wheel, shift knob, and dash, provided a more luxury than sporty feel, although upgrades were available to give the car a sportier look for those who preferred it.

Interior leg room was spacious in the front, according to many drivers, although the back seat could feel cramped for adults. Still, many drivers felt that the XK-Series, with standard features like electronic traction control, stability control, a brake assist system, heated leather seats, and an Alpine AM/FM stereo with a six-disc CD changer, compared quite favorably to the more upscale XJ-Series, and that even the supercharged XJR, with its significant price premium, represented a good value.

Users ranked 2005 Jaguar XK-Series against other cars which they drove/owned. Each ranking was based on 9 categories. Here is the summary of top rankings.

Have you driven a 2005 Jaguar XK-Series?
Rank This Car

I changed the air filter and when I started it afterwards I have to keep pumping gas and it runs roughly and then cuts down completely.

Why My Car Do Not Have Price Analyse?

How Do I Get In Touch With Someone About This Jag I Would Like To Buy!