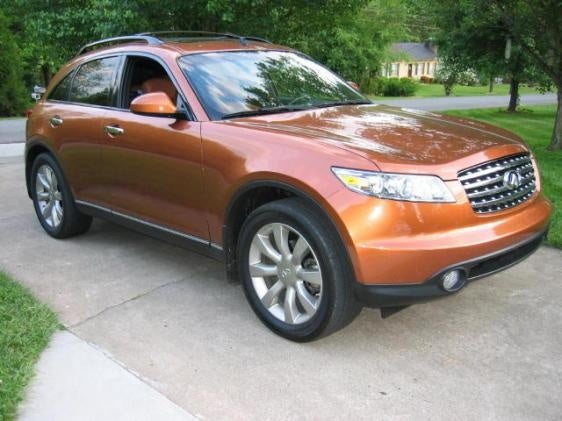 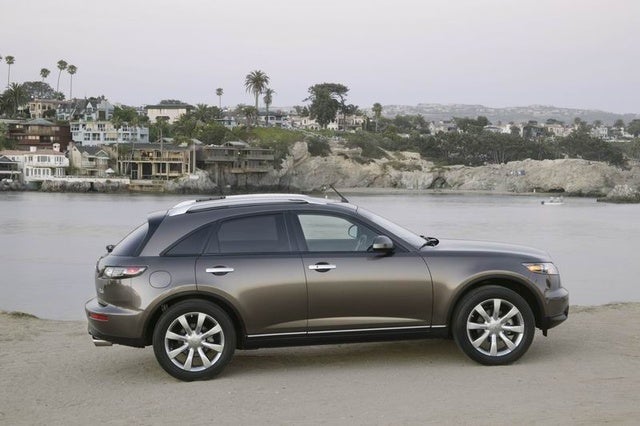 Aimed more at driving enthusiasts than the stay-at-home parent, the 2005 Infiniti FX45 luxury crossover packs a wallop in its 4.5-liter, 315-hp V8 engine and 5-speed shiftable automatic. More sporty than spacious, the crossover seats four or five passengers in two rows, with a smallish cargo area that expands from 27 to 65 cubic feet with the rear seats folded down. The real draw is the sporty look and driving performance, enhanced by a sport-tuned suspension, all-wheel drive, a rear spoiler, and 20-inch wheels. There's an optional roof rack, too, in case you actually use this SUV for functional reasons.

Available in one trim only, there are a few additions for the 2005 FX45. Standard side curtain airbags for both rows join dual front bags, and an optional Lane Departure Alert system can be added to the cruise control function. Equipped with laser and camera sensors, this warning system detects when the car is drifting too close to other cars and lets out a loud beep to wake drivers out of their Speed Racer revery. But the FX45 is not only fast, it's also safe, with five-star rankings from the NHTSA in all categories. This is due to the standard traction and stability control, 4-wheel disc and ABS brakes, foglights, and xenon headlights.

Sloped and rounded rear rooflines and a muscular profile depart from the typical SUV stance, and chrome and aluminum accents provide extra flash. The interior drips with luxury features, such as heated leather seats, power front seats, and a CD changer. A Technology Package adds the new Lane Departure system, along with satellite radio, a rearview camera, and a navigation system. A sunroof is also available.

There's no doubt that owners love the FX45's V8 power and acceleration response, which combines street-racing sensibility with SUV functionality. Tight cornering, good road grip, and smooth handling are other highlights, along with interior comfort and overall style. Reduced cargo space, compared to other crossovers, is a disappointment, and drivers say that the roofline interferes with visibility. Others complain about the lack of a third row option. The auto shifting can be notchy, and the AWD is not capable of off-road performance. As with most SUVs, its 15/19 mpg city/highway won't win any fans.

ADKars I Luv it and gotta find me one

What Do Sat Mean On The Dash

I Am Interested In Buying The Car Listed Below But I Am Not Experienced Wit...