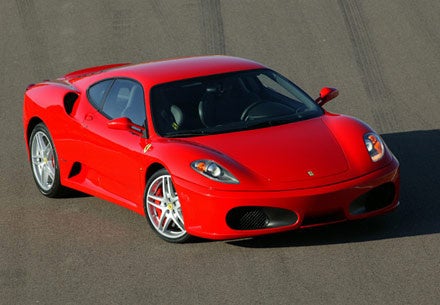 Ferrari sees the 2005 introduction of the F430 as an evolution, not a replacement, of the 360 Modena. The F430 carries over the Modena's extruded aluminum spaceframe, suspension, interior layout, and mid-engine V8 configuration. Yet, while similar in form, the F430's sheet metal shares only the doors with the Modena along with 30% of its parts.

Yet, the F430's DNA isn't a single strand. It also includes the great Enzo supercar for its styling hints, Ferrari's Formula 1 team for some of its engineering, and a dash of Maserati.

When Ferrari bought Maserati, they developed a new line of V8s for the development of that marquee. The basic block and main bearing architecture came to the F430 and evolved into its 4.3-liter aluminum V8. The F430's V8 sets a world class high performance standard by generating 483 hp at 8,500 rpm redline, which translates into 113 hp per liter. Few production engines can match those figures without some sort of forced air induction—either a turbo or supercharger. While Ferrari gives the 0-60 blast a sub-4 second estimate, reviewers got an amazing 3.5 seconds in actual testing.

The Formula 1 bits appear in the optional ($10,740) F1 6-speed electro-hydraulic clutch (no clutch pedal), paddle shifted transmission, the E-Diff electronic differential that transmits torque to the rear wheels via the computer (no wheelspin out of the corners), the efficiently tuned airflow management underneath the car (downforce without spoilers), and the manettino.

This last piece of equipment, a rotary selector knob, practically comes right off the steering wheel of Ferrari Formula 1 ace, Michael Schumacher. Mounted on the steering wheel, this single control coordinates the traction control, the stability control, F1 transmission's shift speed, and the firmness of the electronic shock-damping system. There are five levels of control: ice, low traction, sport, race, and CST, which shuts down all the electronic safety nets except for the ABS and the E-Diff.

The F430 is a rocket in street car sheet metal—another Ferrari classic.