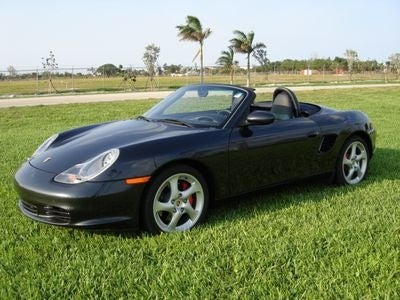 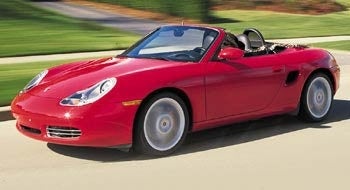 The two-seat, mid-engined Porsche Boxster was available in three models for 2004. The base-model Boxster was equipped with a 2.7-liter horizontally opposed (or boxer-style) six-cylinder engine that produced 228 horsepower, while the Boxster S was powered by a 3.2-liter horizontal six-cylinder that generated 258 horspower.
New for 2004 was the limited-edition Boxster S Anniversary Edition, which commemorated the 50th anniversary of the Porsche 550 Spyder, which influenced the design of the Boxster. It received a 3.2-liter horizontal six-cylinder that produced 264 horsepower.
A five-speed manual overdrive transmission was standard on the base Boxster, while the Boxster S and Boxster S Anniversary Edition received a six-speed manual transmission as standard equipment. A five-speed automatic transmission, with a gate for manual shifting, was optional.
Standard features for the Boxster included air conditioning, power windows, power door locks, dual front and side airbags, leather seats, power heated mirrors, a keyless entry system, a power-adjustable driver's seat, a leather-trimmed steering wheel, and an AM/FM stereo system with an in-dash CD player.
The Boxster also came with a rear spoiler, four-wheel anti-lock brakes, and a power convertible top.
One of the few upgrades for 2004 was the addition of a sports exhaust system to the list of options.
Drivers thought the Boxster flew the Porsche flag well, even though it was the automaker's entry-level vehicle. They praised its quickness, handling, reliability, suspension, and even its stereo system. Though most Boxster drivers found little to complain about, some would have liked to have a little more legroom and storage space.

What's your take on the 2004 Porsche Boxster?

Have you driven a 2004 Porsche Boxster?
Rank This Car

For some reason, I cannot edit my two listings. When I click on "Edit", it returns a blank form as if this is a new listing. Only the photos are present. When I enter the VIN, an error message state...

How To Open Front Hood Of Boxster With Dead Battery When Alarm Won't Turn O...

have dead battery and so attached jumper cables to element in fuse box and the ground cable to the latch striker in door jam. This set off alarm but manually turning off the lock in driver door does...

How Can I Sell My Heavily Modified Porsche Boxster

98 views with 2 answers (last answer about a year ago)

I have a Boxter 2004, the windows drop normally when I'm opening the roof, but when I put it back up the don't drop, causing the roof not to align with the docking holes, any ideas

Why Do Car Dealer Postings Get The Benefit Of A Higher IMV?

My post for my 2004 Porsche Boxster S has a lower IMV values than cars posted by Dealers that have approximately the same mileage and condition. My car also has optional amenities these others do n...