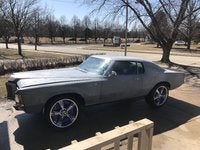 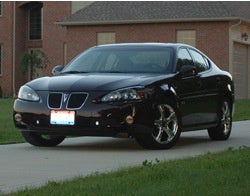 The 2004 Pontiac Grand Prix gets a refresh this year, though it still rests on the same platform, and the exterior shape and style follows the old generation closely. Its makeover comes mainly on the inside.
Gone is the SE trim and the old 3.1 V6. The 2004 Grand Prix comes as a GT1 or GT2 sedan, with the 3.8-liter, 200-hp naturally aspirated V6 engine, or the supecharged GTP which has boosted the 3.8 to 260-hp, a 20-hp gain over last year. Despite the updates, the Grand Prix still only comes with a 4-speed auto tran. ABS is standard on the GT2 and GTP models only, but the GT1 comes nicely equipped with fog lights, rear spoiler, remote entry, cruise control, and power windows and mirrors. The muscular standout for the 2004 Grand Prix, however, is the special Comp-G package for the GTP, which adds a stiffer suspension, electronic throttle control, a tighter turn radius, Stabilitrak stability program, sports seating with supportive bolsters, and the new TAPshift, a touch-activated shift control on the steering wheel. This gives you the sense of shifting gears even with the old 4-speed automatic.

Structurally, the 2004 Grand Prix gains some height and width for more spacious seating inside. Functionally, the front passenger seat now folds flat in addition to the rear-folding seats, to carry longer or oversized cargo. The instrument panel has been somewhat simplified, though is still overly busy.
As always, the V6 engine earns a lot of praise from 2004 Pontiac Grand Prix owners. The sports sedan performs well on the highway, with good acceleration and sturdy handling. Shifting is smooth, and the driving enthusiast who must masquerade as a responsible consumer will enjoy the peppy ride. Other driver favorites are the heads-up display, the fold-down front seat, and the large trunk. The Grand Prix still has limited rear headroom because of its wedge design, and the legroom hasn't improved much. Same goes for the quality of materials, which still look disappointingly cheap. Drivers also wish for an updated transmission.

What's your take on the 2004 Pontiac Grand Prix?

Have you driven a 2004 Pontiac Grand Prix?
Rank This Car

where do I put fluid in my 04 grand prix

id like to know if there is a way to get the interior light to shut off /not even come on /or stay on while door open an no key in the ignition. ?2004 grand prix 3.8

80 views with 2 answers (last answer about a month ago)

MY 2004 PONTIAC GRAND PRIX GT KEEPS SHUTTING DOWN ON ME WHILE DRIVING.IF I PUT IT IN PARK AND START IT BACK UP IT USUALLY STARTS.TOOK TO MY MECHANIC HE RAN A SCAN AND NOTHING SHOWED.SO HE PUT IN A ...

How To Buy Vehicle Sight Unseen?