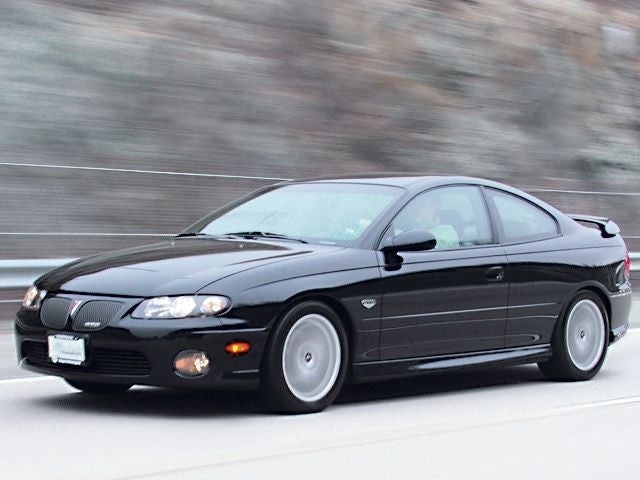 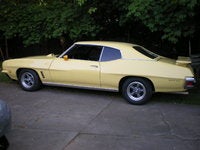 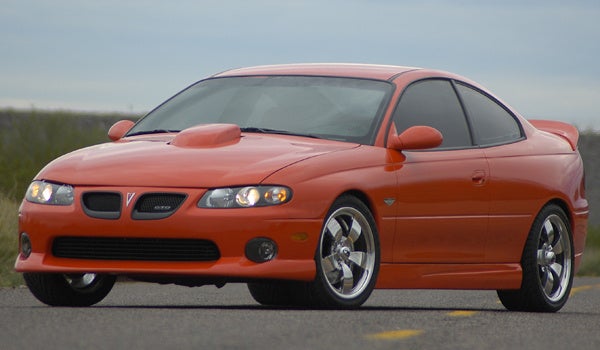 Back after a 30 year absence, the legendary Pontiac GTO returns as a rear-wheel drive two-door coupe based on the Australian Holden Monaro, a GM subsidiary. More rounded than muscular, and with simple smooth lines and a barely noticeable rear spoiler, the 2004 Pontiac GTO might be mistaken for a less powerful coupe than it really is. What it lacks in sporty looks, it makes up for under the hood.

The 2004 GTO has a throaty 5.7-liter, 350-hp V8 engine that hits 0-60 in 5.3 seconds. That good enough for you? Sitting low to the ground on its independent sports supension, the 2004 GTO comes standard with a 4-speed automatic (why?) and a 6-speed manual is optional. Lacking the hood scoops and trims of the Firebird, the GTO goes for simplicity inside and out.

Uncharacteristically for Pontiac, the dashboard is uncluttered and straightforward. The 2004 GTO comes standard with power adjustable leather seats, remote entry, tilt and telescopic steering, and audio controls on the steering wheel. Traction control and 4-wheel ABS are also standard. Though jarring at first, the interior stitching and gauges are tricked out in the same color as the exterior.
Despite its name recognition, the 2004 GTO did not sell well, either because of poor marketing, a bland design, or better prices from competitors. However, GTO owners loved its awesome power and surprisingly smooth ride and responsive acceleration. The car felt stable, yet without sacrificing fun. They also liked that it's somewhat unique on the road, with so few having been sold. Some sticking points are the cramped access to the actually roomy backseat. The trunk is much too small since the gas tank is housed between the trunk and the rear seats, taking up storage space. Others complain that the power seats move too slowly.

Have you driven a 2004 Pontiac GTO?
Rank This Car

Have a 2004 Pontiac GTO with a cracked windshield. Called Safelite who had the glass but not the molding so they will not repair. Anyone know where I can get a molding for my 2004 Unicorn? I live ...

Buying A Car From A Private Seller In A Different State.

How is the paperwork handled

I am trying to complete the sale as Guru95WGP3 of my 2004 Pontiac GTO. The buyer has verified the Vin #, but the process does not recognize the last 4 digits of the title. The title is Florida tit...

Selling Car But Not Through The Listing.

What happens if I find a buyer but not through CarGurus