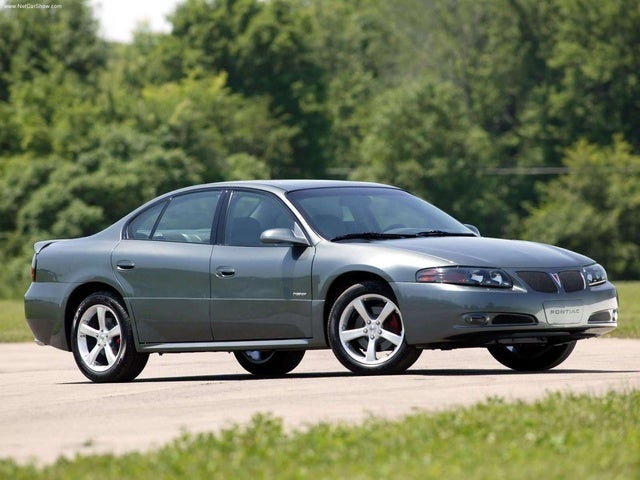 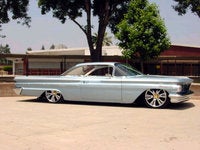 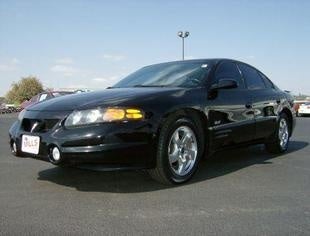 The 2004 Pontiac Bonneville dumps the SSEi trim with its supercharged 3.8 V6 engine and replaces it with a lot more heft and performance. The new Bonneville GXP takes the place of the SSEi with its Cadillac Northstar 4.6-liter, 275-hp V8 engine. Drivers were always wishing for more engine power, and now the 2004 Bonneville actually does live up to its performance sedan image.
The SE and SLE trims remain, carrying the same 3.8-liter, 205-hp V6. A 4-speed auto tran is standard across the line of 2004 Bonnevilles, and some owners and experts say the lack of a 5 or 6-speed manual option is glaring in a sporty sedan. The GXP supposedly clocked 0-60 in 6.5 seconds, and comes with many of the features of the old SSEi, including magnetic variable steering, anti-skid control, and a sports suspension. New fascia and head/taillight styling, four exhaust tips, a rear spoiler, and 18-inch wheels complete the package. The base SE is still a great deal since it comes with a lot of standard features, such as ABS brakes, power mirrors, windows, and doors, self-leveling suspension, power driver's seat, cruise control, and remote entry. The SLE adds a few extras onto the price tag.
The new 2004 Bonneville GXP power is highly welcomed by owners, who love its highway cruising speed and immediate acceleration. Most owners say the Bonneville is roomy and comfortable, though the sportier design and sunroof tend to limit headroom in the back seat. The GXP fits four comfortably instead of five in the other trims. Handling is sporty, and owners like the overall style. The 2004 Bonny hugs the road, and the SE and SLE get great gas mileage. Owners love all the standard features, particularly the heads-up display and heated seats. Disappointments include the lack of a manual transmission, an overly busy dash, no fold-down rear seat option, and a heavy feel to this large car. Some drivers want even more horsepower.

What's your take on the 2004 Pontiac Bonneville?

Have you driven a 2004 Pontiac Bonneville?
Rank This Car

Just bought a 2004 Pontiac Bonneville SLE and I noticed that the battery under the back seat, was almost 1/4 submerged in water! I was shocked because I had just driven it but all the electronics a...

Where is the fuel shut off switch located ? I've checked everywhere I can think of

What All Model's And Yrs Will Interchange With 04 Bonneville

My 2004 Pontiac Bonneville sle is reading a voltage of 15.8 and when I drive it goes up more once I go pass 60mph the check charging system light come on when I slow down it goes away what can be ...