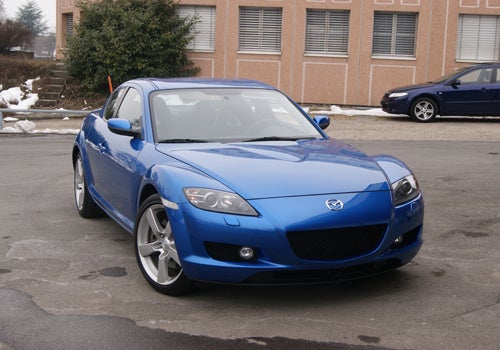 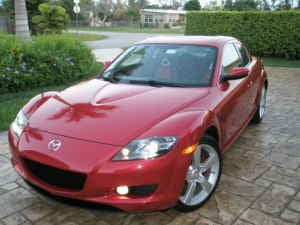 When it was introduced in 2004, the RX-8 four-seat sport coupe was Mazda's first rotary-engined car since the RX-7 was discontinued
in 1995. And, in fact, the RX-8 was considered the successor to the RX-7, which was probably the most memorable and iconic car Mazda has ever made. Although the RX-8 hasn't generated the buzz that surrounded the RX-7, it's certainly a worthy 21st century standard-bearer of the RX name.
The RX-8 was powered by a small, super-lightweight rotary engine called the Renesi, which Mazda notes was smaller than the car's transmission. Yet in its first year, the 1.3-liter rotary engine produced 238 horsepower when the car was equipped with a standard six-speed manual transmission, and 197 horsepower when linked to a four-speed automatic transmission.
Mazda notes that the Renesis rotary engine has no pistons or valves, but instead consists only of two rotors and a crankshaft that continually rotate inside a housing to create combustion. As a result, the engine gives off a distinctive hum, rather than the typical sound of an internal combustion engine.
In its first year, the RX-8 was available as a solitary basic model. Standard features included power windows, power door locks, air conditioning, dual front and side airbags, cruise control, a leather-wrapped steering wheel with a tilt column, steering-wheel-mounted controls, a tire pressure monitor, and an AM/FM stereo system with a CD player.
Fast, fun, comfortable, agile, and responsive, the RX-8 was a hit with most drivers. The car's styling was a bit controversial, with some thinking it looked good but others believing the car's styling could be improved. Some also noted that their cars needed too many repairs. But the fact that the RX-8 was a sports coupe that had the functionality of a sedan was one of its biggest selling points.

Ivan It's not a car for those who aren't true "gear heads". This car will test your patience and your pocket if you're not careful. After 35k miles of ownership. I hate this car. Would I buy it again? Hell yea. There's nothing that will compare to a rotary powered car. Just do you research

I have a 04 Mazda rx8 with 6 speed manual transmission and I'm changing the pilot bearing and a see in the hole wear the new pilot bearing goes it is scarred up inside after I room the old pilot ...

Can I Install A Renesis For Automatic Transmission In A Car With Manual Tra...

Hello Was wondering what is the difference if any between a Renesis engine for an Automatic transmission and one for a manual transmission. I have an RX-8 with manual tranny, and am getting a deal on...

I bought a 2004 Mazda RX8 in an auction. The key was lost along the way and I had to get a new one made. I have no knowledge of the car starting. I tried to start it and all I get is dash lights in...

64 views with no answers yet
5

I’ve noticed that whenever it gets cold my car doesn’t want to accelerate as much and sometimes when I’m driving and my rpms hit around 5 to 6 thousand rpms it makes a raddling noise like somethin...

Where Are The Apex Seals And How Do I Get To Them To See If They Are In Goo...

I am trying to see if the seals are in good shape because the dealer said it may not need a new motor if the person who changed to spark plugs might have put them in wrong in shich case it would only ...