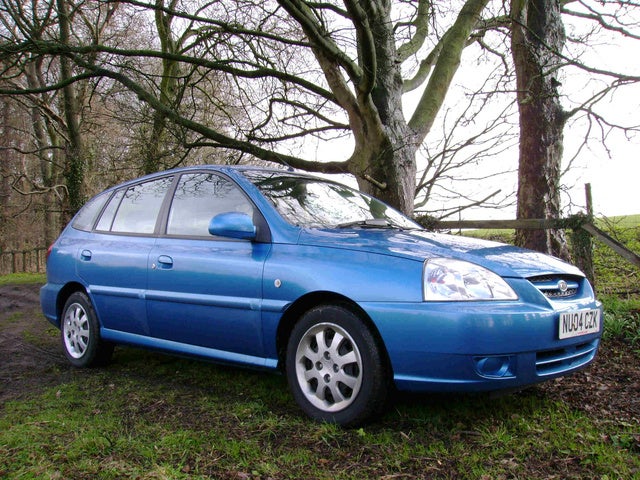 No one got caught speeding in a Kia Rio. The subcompact economy sedan and Cinco wagon (Cinco for 5 doors) is a personal commuter car that got significant performance improvements last year. Its lightweight and barebones features make it affordable and small enough to make good use of its 1.6-liter, 104-hp DOHC I4 engine, but acceleration and revving performance at higher speeds is noticeable. The 2004 Rio gets a few updates, including an optional rear spoiler for the sedan, alloy wheels for the Cinco wagon, and new driver's lumbar support in both models.

While not the most thrilling of cars, the 2004 Rio is practical for first-time buyers or city dwellers. The Cinco is the most versatile and features a 24.3 cubic foot cargo area that nearly doubles with the seats folded down. Compare this to the sedan, with its tiny 9.2 cubic foot trunk and no-folding rear seats. The sedan comes with power brakes, intermittent wipers, automatic headlights, 14-inch wheels, and dual front airbags. Side impact bags are not available. ABS was recently made an option. In what seems kind of harsh, but helps keep the price down, air conditioning and a radio are also only an option. The 2004 Rio Cinco adds power windows, power steering, a CD player, a rear wiper, and a tachometer, but still has no air conditioning. A Power Package for the sedan gives you the power windows and locks.

Most drivers of the 2004 Kia Rio like its fuel economy and city performance, saying it zips in and out of traffic confidently and fits easily into small parking spaces. Highway travel is compromised by slow pickup that is also noisy. On the plus side, the 2004 Rio has tight cornering and a lot of headroom, though rear legroom is limited. There appear to be some issues with honoring the warranty for some owners. Other complaints include a rough ride on bumpy roads, the exterior gets easily dinged up, the lack of power steering in the sedan, and a struggling engine when going uphill with the air conditioning on.

How To Remove Ignition Barrel In 2004 Kia Rio

Do All 2004 Kia Rios Have An Oil Shut Off Sensor Valve?

My son had the oil changed at a local shop last Sat. Today, the oil plug fell out and the car stopped running within 1.5 miles of the oil going down. Hoping that the sensor turned off the car before ...

My engine light came on after filling up. Then it went off then after few miles it came back on