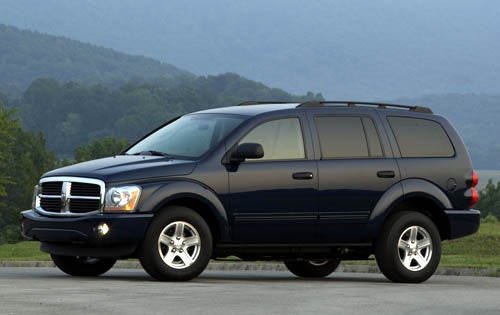 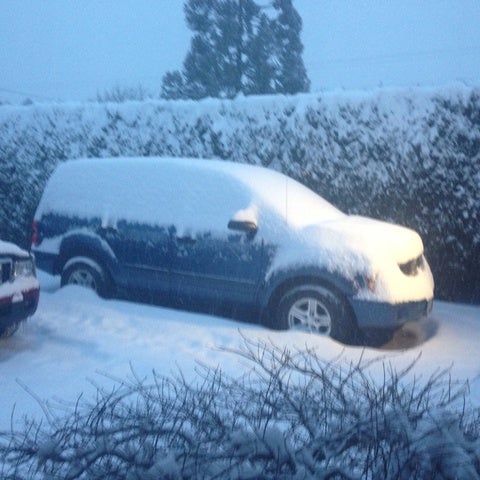 The Dodge Durango went through a total overhaul in 2004. Once based on the Dakota pickup's platform, it received a re-engineered platform designed specifically for an SUV, resulting in a much smoother ride, with fewer bumps and shudders than in previous Durangos.

It also got bigger. No longer fooling anyone with it's "mid-size" claims, the Durango embraced its full-size stature proudly by adding 7 inches in length and 3 inches in width and depth, for a grand total of 102 cubic feet of cargo room (15% more than in 2003) when both second and third row seats were down. Standing on 17-inch wheels and still available in either 2WD or 4WD, three trims were offered -- the ST, SLT, and Limited, which featured more luxurious options.

Standard engine on the ST was the 3.7-liter, 210-hp V6. The SLT came standard with the 4.7-liter, 235-hp, Magnum V8. But the top of the line engine was the rumbling, intense 5.7-liter, 335-hp Hemi V8, for a rated towing capacity of 8900 pounds. Paired with a Tow/Haul package, the Hemis featured more refined shifting capabilities, especially with large loads. The braking system, taken from the Ram, was the largest in its class and much more responsive than previous years.

The body itself is redesigned, with a sloping windshield and rooflines to avoid a box minivan look, lower car-height bumpers, hidden headlights, and the intimidating Dodge cross-hair chrome grille. For the first time, a sunroof option is available. Dodge also worked on creating a more aerodynamic SUV, to reduce wind and road noise, even adding extra lamination to the windows. Inside, a redesigned dash provides larger gauges. In SLT and above, second row climate control and DVD entertainment system ensure a happy ride during family road trips. The front seat is spacious with lots of nooks and crannies for storage.

The 2004 Dodge Durango is bigger and more powerful this year, able to haul truck-like loads, but it handles more now like a car, with lighter steering, a much smoother ride, and even better turn ratios, though some reviewers felt it had sacrificed some stability. Drivers love the Hemi (no surprise) the towing capacity, and the cargo space. The biggest complaint, as always, is fuel economy (but don't complain about fuel economy if you're buying a Hemi), and the lack of legroom in the second row seats. A cheaply-made dash and cloth seating were also mentioned.

Have you driven a 2004 Dodge Durango?
Rank This Car

Cluster Will Not Reset To Right Spots

After taking cluster apart i can push the reset miles button and turn key on not running .all the lights come on i let go button and the gauges move but will not reset to the right place .Any ideal ...

White Smoke Out Of Tailpipe

I have a 04 Durango with 155000 miles. I hade a full diagnostics test whitch showed the code for multiple mis fire in multiple cylinders so I changed all spark plugs and the 6 and 8 ignition coil a...

The Climate Control Display Does Not Work.

The climate control display does not work yet the ac, heat, and fans are working just the display on my 2004 Dodge Durango, can it be a fuse?