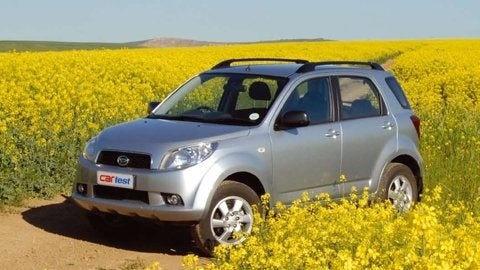 Have you driven a 2004 Daihatsu Terios?
Rank This Car

Small 4x4, easy of handling. Good fuel consumption. Good car for city use. Back seat is not so good for long trip because it's too flat. The off-road capability is also good because 4 wheel output c... Read More

Go For It If You Prefer Looks And Comfort Over Engine Performance. By Johnny

Performance - handling was smooth and responsive but the overall grip was not up to the mark. Also the engine was quite noisy. Build Quality - Build was quite good. Nice and curvy shapes. Apearance - ... Read More

the handling is something not to be laughed at this car should tip up the way i drive it but i beat a bmw m3 on some corners although a little more power might be nice its still quite nppy for whats u... Read More

it has quiet good acceleration, and braking bad not too good in handling, high body roll (limbung). standard daihatsu build quality, its radiator and cooling system not as good as toyota. it was good... Read More

I love the car cause it's cute. What i dislike is the scratching sound it makes when i turn... it's as a result of the wheels being to big. I'm a fast driver and the car gives me what i need. Currentl... Read More