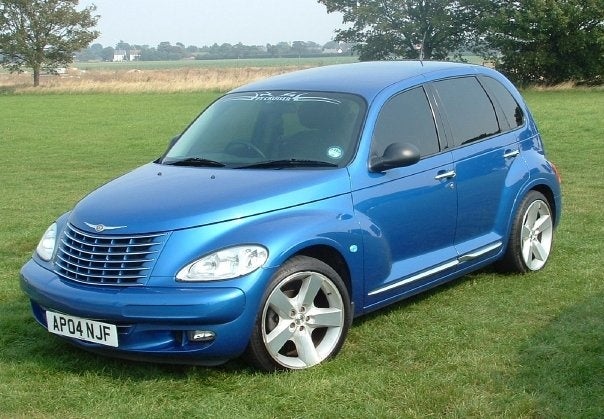 The first-generation PT Cruiser is now in its fourth year of production, and Chrysler has continued to add new options. There are now eight trims, thanks to the addition of turbo-charged versions of the Touring and Limited trims. Again, Chrysler will offer the unique Dream Cruiser (now Series 3) in limited production.

There are now three engine options for the PT lineup. The Base, Touring, and Limited models are still powered by an unaltered 2.4 liter inline 4-cylinder, which delivers 150 hp and 162 lb-ft of torque. Both the Touring and Limited trims are now eligible for a powerplant upgrade, in the form of turbocharged 2.4-liter engine, which generates 180 hp and 210 lb-ft of torque. A new Limited edition Platinum Series trim will also use this engine.

The two top-shelf PT Cruisers, Dream Cruiser and GT, house a more powerful version of the 2.4-liter four cylinder. This engine provides 220 hp and 245 lb-ft of torque, sending the PT from 0 to 60 in just 6.7 seconds.

Chrysler has also changed the transmission options for 2004. The Base, GT, and Dream Cruiser automatically get the 5-speed Getrag manual transmission. All other models use a 4-speed automatic.

What's your take on the 2004 Chrysler PT Cruiser?

Have you driven a 2004 Chrysler PT Cruiser?
Rank This Car

My Pt Cruiser Is Loud When Driving

Why does my cruiser sound loud when driving?

I have a PT Cruiser Convertible/Turbo with almost 80,000 miles. When I try to start it, I get nothing. Wait a few seconds and then it starts. This has been going on for a couple of days. Then today,...

Why would the camshaft position sensor code continuously show up after replacing the sensor?

My PT Cruiser Keeps Overheating when I go over 30 or 40 mph I Flushed it Filled it Replaced Thermostat The Fan Works. WTF ?

2004 PT Cruiser Overheating To The Point And Boiling Radiator Water