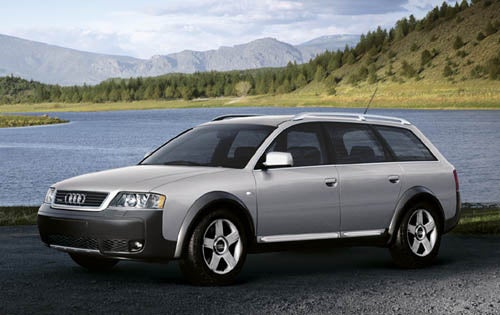 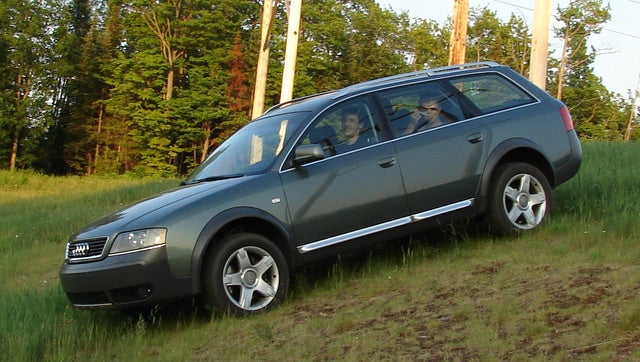 The 2004 Audi allroad quattro is the first full year that the new 4.2-liter, 300-hp V8 is available, having been introduced in midyear 2003. Paired with a 5-speed Tiptronic, it does not suffer from the noticeable turbo lag that exists in the 2.7T allroad. The 2.7 V6 gets 250-hp and is matched with a 6-speed manual transmission. Aside from losing the black fenders, there were no other changes in the allroad quattro for 2004.

Though billed as seating five, four fit comfortably in the leather seats. The split-fold 60/40 rear seats expand the 73-cubic feet of the rear cargo area. Audi's typical focus on interior luxury and elegance are not wasted on the quattro, with its adjustable seats, heated seat and steering wheel options, dual climate control, and Bose sound system. The allroad quattro struggled in the U.S., despite its crossover appeal, perhaps because it couldn't decide whether it was a car or an SUV. Unlike the A6 Avant, on which it is based, the 2004 allroad quattro offers variable suspension, which adjusts the ride height according to road conditions -- lower for highway travel and higher for more rugged offroading. The combination of quattro and the air suspension makes the allroad a powerful and versatile wagon, if somewhat stiffer in handling. The extra engine power in the V8 adds a nice sportiness to the drive.

The boxy style of wagons is missing from the curvy allroad quattro, and this style appeals to owners. They also like the confident handling and solid feel of the car, as well as the extra pep from the V8. Top marks go to the AWD system that works great in snowy climates. The cargo space and legroom make long family trips almost pleasant. Downsides are high repair costs, poor initial acceleration with the turbo, and lousy cupholders. Your second home will be at the gas pump, as the 2004 allroad gets terrible gas mileage.

Have you driven a 2004 Audi Allroad?
Rank This Car

How Do I Change The Compressor And Alternator Belt At The Fron T Of The Ene...

how is milage per gallon? can you change the chip and make it strt 6 330 hp?

I Have A Allroad 2003 And Recently Experience A Excesive Comsumption Of M...

My 2004 4.2L V8 Allroad is having transmission problems that costs $7,000 to fix. Soon the reverse gear will no longer work. anyone experiencing similar problems?