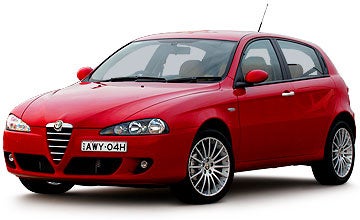 Cuore Sportivo By Can

Engine note is amazing, the engine is not very powerfull but feels so alive and drives so responsively that makes you very happy. It is a little bit fragile, there are some points that you have to c... Read More

Like A Jealous Italian Lover It Will Kill You If You Think Of It As A Domestic Appliance. By John

This is the JTD turbo diesel so masses of turbo lag before it snaps your neck and launches. Then at 4000 RMP you need another gear before its all over. Ridiculous fuel economy and still effortless c... Read More

TS engine note is nice. Performance is acceptable. I wish it is a V6 engine. Pretty & Sexy design ... especially with the look of 2 doors effect. Cost is resonable comparing the performance you get ou... Read More

great acceleration and braking. I am even saying a word about the handling. I love it's look!! It has a great sound and it's interior and exterior are designed with love I have no worries!!! Simply... Read More

Argh, Nothing Really By Lebogang

A Truly Reliable Car Over The Past Years By Marco

Despite the many negative talk about Alfa Romeo and especially about this model I have been satisfied with mine since the beginning. The performance of the Diesel engine with 115 hp is nothing spect... Read More

You Should Drive An Alfa , And You'll Understand Me :) By Irena

The car is very good in every performace point...the fun factor is big...untill yet haven't need any repairs...the styling is on a high lve...the cost of ownership wasn't big...at the end , IT'S AN ... Read More

Its Italian By Jay

My little 2 Litre Alfa, its Black, Its Mean, and it runs like a dream. Inside is so Comfy inside Nice tan Leather. Special thanks to the UK government that enabled me to pick this up a year ago for... Read More

Why You Definitly Need The Alfa Romeo Xperience By Rotem

It's a great car, but don't settle for less than the 2.0L 150HP engine. (Although it comes with Selespeed) Prices are really low now. You might want to reconsider. After all, no sports car is like an ... Read More