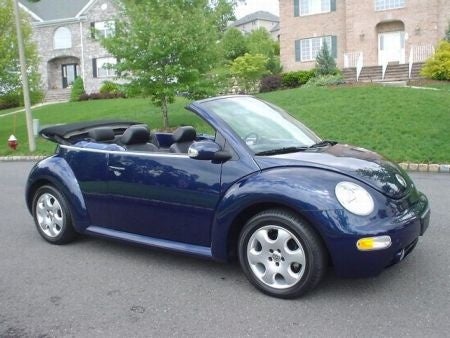 Volkswagen continued to expand its line of Beetles in 2003 with the addition of the Cabriolet (i.e. convertible), which was available in two trim packages, the GL and the GLX 1.8T Turbo. And perhaps that typifies the most significant development for 2003 -- the fact that the Beetle was available in no less the 12 trim packages, offering something for just about every driver.

The other significant trend was the fact that a number of features that were available as options in previous years were now standard equipment on a wide range of trim packages. Power windows, for instance, were now standard across the line, as were power door locks, front and side airbags, power heated mirrors, a lighted entry system, cruise control, anti-lock brakes, and an anti-theft alarm system.

With so much to choose from, including a wide range of options, it's no wonder that Beetle owners were very enthusiastic about their cars, for the most part. The car's styling, handling, and fuel economy were considered positive features, while drivers had some problems with the limited space in the trunk and rear seat, and the comfort level on long trips. Despite those issue, the Beetle continued to be extremely popular.

What's your take on the 2003 Volkswagen Beetle?

Users ranked 2003 Volkswagen Beetle against other cars which they drove/owned. Each ranking was based on 9 categories. Here is the summary of top rankings.

Have you driven a 2003 Volkswagen Beetle?
Rank This Car

Car Turns Over But Won't Start

Total Loss Of Power At 50 Miles An Hour

I was driving my 2003 Volkswagen bug 1.8 L turbo approximately 50 miles an hour when I lost all power and could not get the car started

My beetle could not startup easily after rain. What is wrong with it?

883 views with 4 answers (last answer about a year ago)

WHY DOES MY ALARM KEEP GOING OFF? VW BEETLE