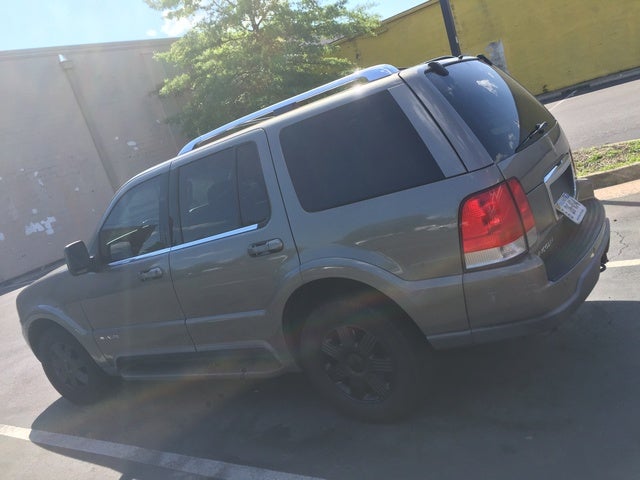 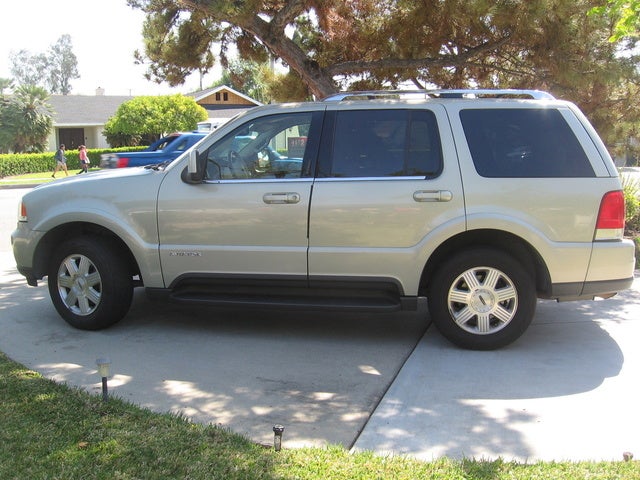 In an effort to attract younger, perhaps childless buyers into their fold, Lincoln introduced the 2003 Aviator, a midsize luxury SUV that's a shorter (by one foot) and lighter (by 1,000 pounds) version of its popular full-size Navigator. The 2003 Lincoln Aviator mimics its big brother in style and luxury and takes its body-on-frame platform and independent rear suspension from the Ford Explorer. Unlike the Explorer, it comes standard with a 4.6-liter DOHC V8 that delivers 302-hp and 300 ft-lbs of torque. Mated to a 5-speed shiftable automatic, it gives the luxury SUV decent towing capacity - up to 7,300 pounds with the optional trailer hitch. The base Luxury and Premium trims are offered in either rear-wheel drive or two forms of all-wheel drive. The automatic full-time AWD apportions torque to the front and rear, while the optional AdvanceTrac system adds torque distribution from side to side. Neither are meant for off-roading, as they lack low-range gearing.

Trying to compete with the BMW X5 and Mercedes' M class of SUVs, the 2003 Aviator offers plenty of bells and whistles. These include creamy leather upholstery, power seats with memory, power pedals, a CD player, steering-wheel-mounted controls, rear climate control, and heated seats. The Premium adds heated and cooled seats and a 6-CD changer. Options add on a sunroof and DVD player. Safety is provided by standard ABS brakes, mirrors with turn signals, foglights, backup sensors, and dual front and side curtain airbags. Traction and stability control and a tire monitor are optional. A nice distinction from the Explorer is the three rows of seats, not often seen in a midsize SUV. Though the third row can be cramped and drastically cuts down on cargo space when upright (only 12 cubic feet), it does offer versatility for young families. The 2003 Aviator seats six, with second-row captain's chairs divided by a flip-up console and a third-row bench for two. Adding the optional second-row bench seat increases passenger capacity to seven. Both seat rows fold nearly flat to offer 77 cubic feet of cargo room.

Although its styling is a virtual carbon copy of the Navigator's, with its large chrome grille and interior wood and satin nickel finish, the 2003 Aviator offers a good compromise between luxury, versatility, and utility. Drivers love the V8 power and acceleration and say the rack-and-pinion steering and independent rear suspension make the SUV easy to drive and handle. They also like the long list of luxury features, particularly the heated/cooled seats. The biggest complaints focused on money - both the initial pricetag and its terrible fuel economy. Many owners don't like the fact that the cargo area's floor slopes upward and the rear seats don't fold flat. They also report numerous repairs to the SUV, though not on any one consistent part.

What's your take on the 2003 Lincoln Aviator?

GuruX2TM2 I would surely love to be driving this aviator if they would work with me on monthly payments. I know people won’t believe me but there still is a thing called hard times. But I’m not looking for sympathy just a chance to get back reestablished. I have a job and really want my aviator back on the road I love that aviator I’m just in missouri

Have you driven a 2003 Lincoln Aviator?
Rank This Car

finding where its located

I have a 2003 Lincoln Aviator and I broke a T on the heater hose and the radiator fluid leaked out it was fixed but it started overheating no matter what I did it kept overheating since then I've h...

652 views with 5 answers (last answer about a year ago)

Which Fan Belt Do I Use To Bypass The AC Compressor On A 2003 Lincoln Aviat...

73 views with 2 answers (last answer about a year ago)

I Know Theres A Few Type Of Differential Fluid Out There But What Kind Woul...

my tire is making noise while driving around town and i know that it has to be my differential fluid that is low but im not sure what type of fluid o use..theres a few of them..example...75w90,80w90...