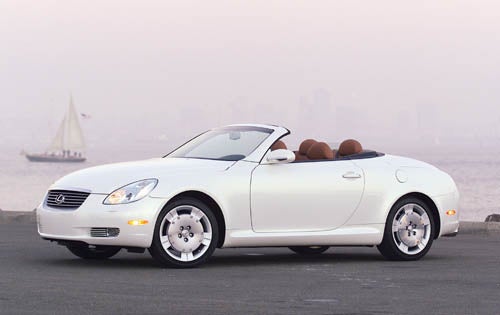 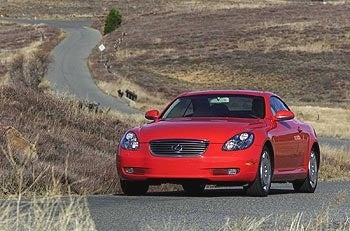 The 2003 Lexus SC 430 was the second model of the new generation of Lexus sports coupes. Nothing was changed or added for 2003, but the Lexus Link emergency service (borrowed from the LS) was now available. Lexus Link was similar to OnStar, but it included a concierge service and was monitored by a separate Lexus staff. The rear wheel drive SC could carry two passengers in considerable comfort and luxury, and two more in far less comfortable quarters. The 2+2 coupe was essentially a two-seater, if front passengers were to be guaranteed adequate leg room.
The new SC was significantly more powerful than its predecessors. The 2003 SC 430 held the LS sedan's 4.3 liter V-8, which generated 300 horsepower and 325 pound-feet of torque. It sped from 0 to 60 in 5.9 to 6.6 (depending on the test) seconds and through the quarter mile in about 14 seconds. The SC had bulked up from a 3494 pound curb weight to 3840 pounds, but new more powerful brakes brought it from 60 mph to a halt in just 121 feet.
The much needed exterior redesign of the SC certainly improved aesthetics, according to drivers, and gave the coupe the same 21st century appeal as its competitors. Owners continued to complain about the addition of the run-flat tires, which greatly added road noise and ride stiffness. These tires were considered a liability on rough roads, because when the tire blows it also ruins the rim, resulting in very costly repairs.

Mo K Great comfortable and reliable convertible. Hate sell it but need money for bills and moving. Will buy another one in future.

Users ranked 2003 Lexus SC 430 against other cars which they drove/owned. Each ranking was based on 9 categories. Here is the summary of top rankings.

How To Upload Picture To Advertisement

How do I upload pics of the car I am selling? When I went through the prompts it never gave me an opportunity to upload and now I am on the payment page.

Blown Engine On A Lexus Sc430

I recently purchased a 2003 SC430 and have realized that the newer models are smaller and I like them better. I know the 2007 is smaller. When did they make that change? Any notes I have read about...

484 views with 3 answers (last answer about a year ago)

Was just quoted $2,300 for cluster switch that works with the roof open/ close button..does that seem possible...that’s JUST for the part!,