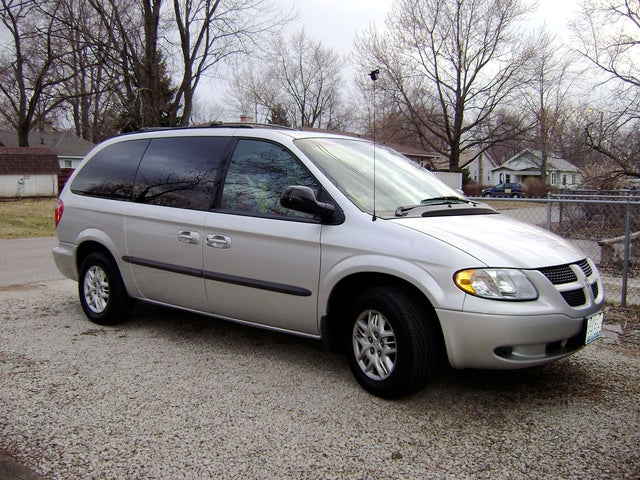 As the minivan was saddled with a suburban soccer mom image, and box-like appearance, sales began to slow. The Dodge Grand Caravan was still on top, but was trying to figure out ways to appeal to a broader base of economically minded families.

In 2002, the Grand Caravan offered two "value" trims, the eX and eL. The eX, was similar to an ES, with its 3.8-liter, 210-hp V6 engine and many of the same standard features, but it offered less options and a cheaper price tag. The eL was also more affordable, and came with the 3.3-liter, 180-hp V6. AWD was only offered in the Sport and ES trims, and was coupled with the 3.8 V6 for better handling, more power, and better traction in bad weather and rough roads.

New for 2002 was a dealer-installed DVD system, and a slightly redesigned front fascia for the ES. While SE now came standard with air conditioning, all higher models offere three-zone temperature control for each row of seats and adjustable pedals and brakes.

The 2002 Grand Caravan gets good driving marks from experts and owners, with its car-like feel and handling, its quick acceleration and sure-footedness, and the smooth and easy AutoStick transmission, available in ES models. While the rear seats do not fold into the floor and are bulky to remove, the Grand Caravan scores high on ride comfort, cargo space, and seat configuration. It scores low for reliability and repair record.

What's your take on the 2002 Dodge Grand Caravan?

Have you driven a 2002 Dodge Grand Caravan?
Rank This Car

My starter went on my Dodge Caravan. I pulled a starter at the pick n pull and installed it. When I plugged my posts I can hear the starter spinning, but there's no power to my van at all.. No cl...

How Do I Complete Or Remove The Listing?

I have completed the cash transaction with the buyer. They haven't supplied their info on the site, so I can't finish the process online. Is there a way I can remove the listing so people know the v...

What Gasket Would Cause Coolant To Leak And A Heater To Stop?

I have an 02 Caravan and a week ago it started leaking coolant and my heater stopped working. I took it to a mechanic and he said it was the gasket above the freezer plug. What I would like to kn...

Intermittent No Crank No Start

02 grand caravan 3.8. Clean, solid connection across the board, New battery, new starter relay, alternator tested good, as did starter. Occasionally when starting will give a single click as thou...