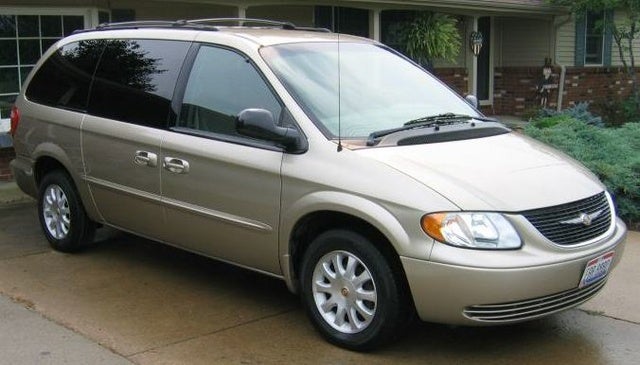 The Town & Country got a few minor changes for 2002, largely directed toward features and options. Power adjustable pedals, rear seat audio controls, and a DVD entertainment system were available. A new eL trim was added, offering a lower-priced entry point for the Town & Country.

Buyers chose from eight Town & Country variants: the base eL, the EX, the moderately equipped LX, the well-appointed LXi, or the ultra-luxurious Limited. The LX, LXi, and Limited were all available with FWD or AWD. The eL and EX were only front-wheel drive.

Only the new eL and LX trims were powered by the 3.3-liter Flex Fuel V6, which delivered 180 horsepower and 210 pound-feet of torque. A four-speed automatic transmission routed power to the front wheels on these two models, and fuel economy was estimated at 18/24 mpg. The other six models housed the 3.8-liter OHV V6 and were supplied with 210 horsepower and 245 pound-feet of torque. A special towing package could be added, which enabled the hauling of 3,800 pounds.

Most of the raves for the Town & Country were directed toward the upper trim levels: LXi and Limited. The automatic sliding doors and power rear hatch were often cited as favorite convenience features. Owners also mentioned the quality of the Infinity sound system and the new DVD entertainment system. Interior comfort and ride quality were at the top of the list for every model.

Owners of the LXi and Limited models had the luxury of more distractions from Chrysler's build quality issues. Frequent complaints included failed window motors, an unrefined transmission, short brake life, and annoying squeaks and rattles. Those who had multiple dealings with Chrysler service were even more unsatisfied. Poor service was a major issue for Chrysler owners.

Have you driven a 2002 Chrysler Town & Country?
Rank This Car

Little If No Heat In Chysler Towm And Country

the van has no leaks and all fluids are fine the hoses are hot and after a wile little if any heat comes thru the vents they blow fine and the van drives well could it be the thermostat ?

2002 Chrysler Town and Country was sitting in driveway for a few months and the battery was dead. Jumped the battery and everything lit up, power seats worked, but as soon as I tried to start it wh...

307 views with 4 answers (last answer about a year ago)

Where Is The Fuse For The Lights For Speedometer Gauge Etc.

I have lost the lights behind the speedometer, fuel, rpm, and temp gauges and I was just wondering if there was a fuse to change for those lights in the dash.

I know this is a faster speed than you think you'd need a minivan for, but just bear with me. When you get this old 2002 T&C up to about 95mph, it won't go any faster and the inside (cab) starts to...

Does A Key Immobilizer Module. On A 2002 Chrysler Town And County Van Need ...