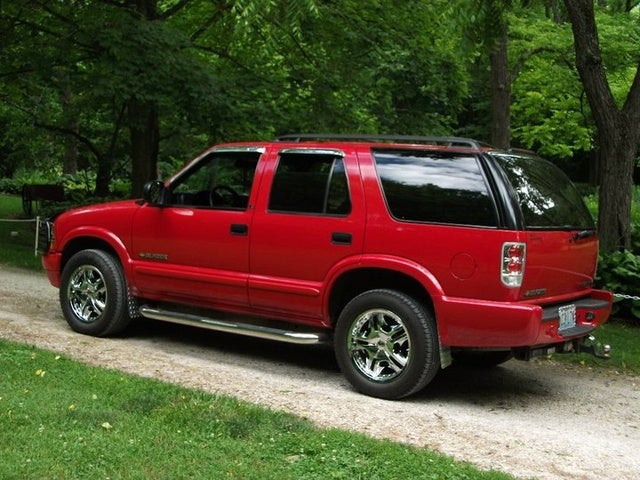 As the model line looked more and more dated, the folks at GM made fewer and fewer innovations to its Chevrolet Blazer. The 2002 Blazer saw only superficial changes, with some minor tweaks to exterior detailing. The good news, though, was that the '02 Chevy Blazer was one of the most affordable midsize SUV offerings on the market; the model's long history and stable design translated into lower manufacturing costs and a lower sticker price.

Even though it didn't have all the bells and whistles some of its newer competitors offered, drivers still went for the rugged appeal and durability of the '02 Blazer. The range of choices were dramatically scaled back for the 2002 model year, and only two trims were offered: the LS and Xtreme. Two-door and four-door bodystyles were available for the LS; the Xtreme came only in a two-door version. 2WD and 4WD versions were available for each trim/bodystyle combo.

Fuel efficiency was pretty solid, especially considering the '02 Blazerâ??s heft and solidity. With a curbweight around 4,000 pounds, the EPA estimated that the Blazer could get 16 mpg city, 20 mpg highway. Its 18-gallon gas tank meant that drivers could fuel up for the long haul as well.

The 2002 Chevrolet Blazer was powered by the Vortec 4300, a 4.3 liter V6 engine clocked at 190 horsepower and 250 lb.-ft. of torque. Dual airbags, ABS anti-lock brakes, and rear child safety locks added to its aura of security.

Fans of the Chevy Blazer were concerned by rumors that the old-school sport utility wagon would be discontinued. Its sister model, the GMC Jimmy, had already been shelved in favor of the Envoy; as Chevrolet spun off the TrailBlazer into its own model line, the writing was on the wall for the Blazer. As it turned out, the model had a couple more years to go, and was only discontinued in 2005.

What's your take on the 2002 Chevrolet Blazer?

Have you driven a 2002 Chevrolet Blazer?
Rank This Car

My engine is pretty much shot in my 02 blazer what year jimmy/blazer/bravada/Astro van( don't know if I missed any) is compatible for an engine swap?

What harness is interchangeable for this vehicle? Can't find this part anywhere.

02 Blazer. Starts But Shuts Off Immediately.

I lost the key so I broke out the ignition. It fired right up and stayed running. I shut it off and now it starts but keeps shutting off. I replaced the steering column and still does the same thi...

Why Is My 2002 Chevy Blazer Overheating?

I have a 2002 Chevrolet Blazer that I bought over the summer and never had any problems with it since then. After the snow storm we had in Indiana last week, it started overheating (got stuck in so...