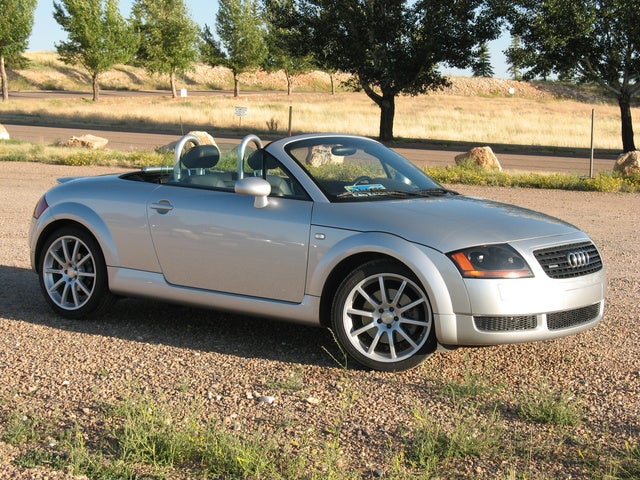 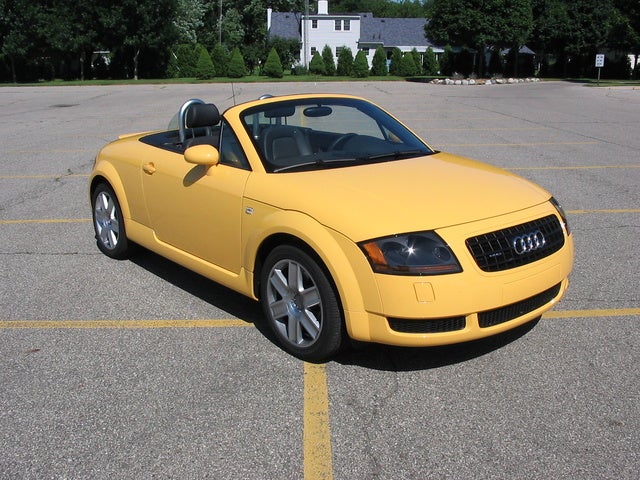 The stuff of fantasies, daydreams, and a million blown-out birthday candle wishes, the Audi TT didn't see many changes in 2002. And why should it? Even though it's not a racer per se, it looks like one, and isn't image more important than substance these days anyway? Not to say that the 2002 Audi TT doesn't perform. Available as either a Coupe or convertible Roadster, the TT comes with a 1.8-liter, 4-cylinder engine tuned to either 180-hp or 225-hp. While the 180-hp is standard front-wheel drive, the 225-hp is standard with quattro all-wheel drive (the 180-hp Coupe has a quattro option) ABS brakes, traction control, and an electronic stability program are standard for all trims.

In 2002, to celebrate its entry into the Le Mans circuit, Audi issued a limited number of ALMS TTs (American Le Mans Series), a souped up version of the 225 coupe with larger 18-inch high performance tires and special badging.

The 2002 Audi TT is all about touring in style. Not only does the combination of the 225-hp engine and quattro technology ensure confident and road-gripping handling on back roads, but the interior luxury cocoons you in the sleek bubble that is the aluminum-bodied TT. It seats four, but the backseat is put to better use folded down for extra trunk space. In the Roadster, the soft top stores in the trunk, cutting down on capacity. New in 2002, an in-dash CD changer replaced the odd behind-the-driver's-seat changer in previous TTs. Heated seats were available, to keep you warm even with the top down.

The 2002 TT gets praise for its expert and nimble handling. Though not mind-blowing fast, it is powerful and sporty enough to raise the neck hairs on the average driver. Most owners think it is the most beautiful, unique, and sexy car on the road. The large trunk in the Coupe is a big surprise, and many enjoy the sporty exhaust sounds. Criticisms seem to focus on the TT's unreliability and time spent in repair shops and dealing with poor Audi customer service. Performance-wise, there is a noticeable turbo lag, though once it gets up to speed, the Audi is impressive. Owner would like better-placed cupholders and power seats and more engine power in general. There are reports of rattling at high speeds and over bumps.

Pfjett TT are beautiful unique cars. My issue is dealers advertising a normal TT as a ALMS model and you point it out to them and they still advertise the car wrong and harass me to buy it when I'm only looking for a ALMS.

When Can I Start Purchase

when can i link bank to purchase

Verify Bank Funding Through My Bank

No Response From Owner

My Audi TT 2002 refuses to start. Works fine to go to work come home from work fine , then if I go out again in evening won't start until the next day. Also last week got in my car am for work and ...

Had fuel pump replaced in my 2002 audi Quattro last week since then petrol gauge keeps changing as to how much fuel I have and I have put £50 petrol in to do a 60 mile journey but my Guage goes from...