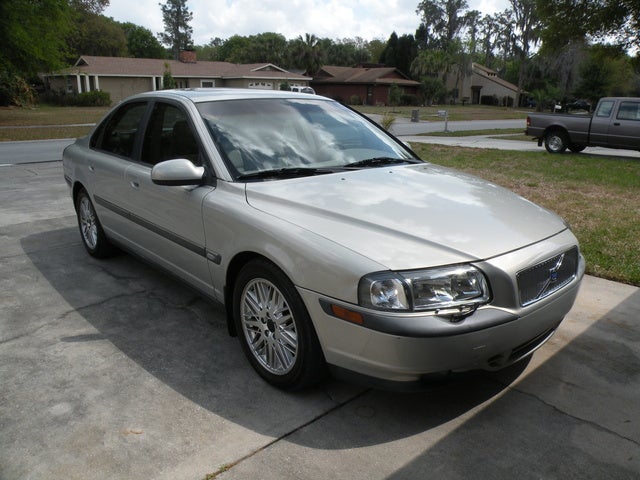 There were no significant changes for Volvo's flagship S80 lineup this year. A new option group made rear sun-blocking curtains available this year.

The S80 is available in two trim levels: the 2.9 and the T6. The lower level 2.9, as the name indicates, is powered by a 2.9-liter inline six cylinder engine. This power plant generates 197 horsepower and 207 pound-feet of torque. Gas mileage for the 2.9 is estimated at 18/26 mpg. The T6 houses a turbocharged 2.8-liter inline six, supplying 268 horsepower and 280 pound-feet of torque. The EPA estimate falls to 17/25 mpg with this extra power. Both engines are paired with a four-speed automatic transmission.

This flagship Volvo ranges in price from the mid-30s to the low 40s, but features are commensurate with the cost. Both models include the luxury essentials like dual-zone automatic air conditioning, cruise control, eight-way power front seats, a driver seat memory, heated power mirrors and keyless entry. The upper level T6 adds a few features and performance upgrades, and options on both models include Dynamic Stability Traction Control, a navigation system, a sunroof, CD changer, and an infrared-reflective windshield.

Consumers list passenger and cargo room, durability, safety, and performance among the S80's top features. The T6 speeds from 0 to 60 mph in about seven seconds, and test drivers report no significant turbo lag when accelerating off the line. The base 2.9 rides a little rocky at higher speeds, while the T6's sport suspension may be a bit intrusive on some uneven services.

Inside, the S80's cabin is well-shielded from wind and engine noise, and the controls and gauges are clearly marked and easy to operate.

Shelli Hi! I bought a 2000 Volvo S80 T6 2.8 litre in October 2012 off of Craigs List. Huge mistake I know. I've had to put the heater hoses in, as one was not attached to the core and the other was damaged. Then the heater core busted loose into my drivers side floorboard. Got that replaced. All of the time during repairs I was losing coolant, the message panel kept telling me coolant level low. I took it back to the place I had it repaired, and they did a diagnostic on it and told me I have a blown head gasket. Mad money to fix. The owner of the establishment had a friend who was a "Volvo Guru" put a sealant through it. It worked temporarily. Now I'm overheating and the "coolant" message comes on. Now, I need to know if this has symptoms of a bad head gasket or a water-pump/timing belt. Or does it just need a thermoustat? I need help! I need to talk to someone who knows about these complicated engines. I will appreciate any feed back. Thank You!! Shelli...

Shelli DUH!! My E-mail is lyndall910@Gmail.com...Shelli

What is the average lifetime millage for a 2000 Volvo S80? I'm looking to buy one that has 114,000 miles and need to know a rough estimate of how long they run. Thanks

how do i knock out the airbag warning light? there is no problem with it, only keeps displaying air bag service