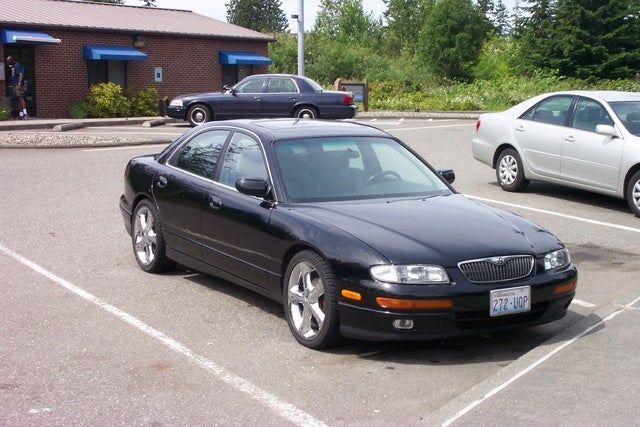 In recognition of the millennium, and in keeping with its name, Mazda's Millennia luxury sedan was available in a special Millennium Edition for 2000. The Millennium Edition was equipped with a supercharged 210-horsepower, 2.3-liter V6 engine, and came with such features as a sunroof, an in-dash CD changer, suede seats, and special colors, wheels, and trim.
The Millennium Edition joined two other Millennia models, which were virtually unchanged from the previous year. The Base Millennia sedan was powered by a 170-horsepower 2.5-liter V6, which was linked to a four-speed automatic transmission (standard across the line). Standard features included air conditioning, power windows, power door locks, power seats in the front, a tilt steering wheel with a memory feature, cruise control, automatic climate control, dual airbags, and a lighted entry system.
Stepping up a notch, the Millennia S version received a supercharged 2.3-liter V6, which pushed horsepower up to 210. It was equipped with an upgraded list of standard features that included leather seats, a power sunroof, and traction control.
For the most part, drivers gave the Millennia positive marks, citing its handling, sport-tuned suspension, braking, interior appointments, and reliability as being noteworthy. Performance was called adequate, though not spectacular. In addition, the Millennia was considered a good value by most drivers. However, although Mazda dropped the price on the Millennia sedan for 2000, drivers noted the vehicle's resale value was a sore spot.

What's your take on the 2000 Mazda Millenia?

Have you driven a 2000 Mazda Millenia?
Rank This Car

The car has a rough idle, slow pick up when starting out at lights, stop signs, etc. While driving the car it shakes. It seems like the engine is straining. Also, the check engine light is on.

2000 Mazda Millenia and I replaced the Front struts two years ago and now it seems that they are bad again. How often should I expect replace them especially since the parts and labor was only guaran...

When my. Mazda Millinia has been sitting and we get rain it b won't start. Once whatever gains moisture has time ti dry out it will start.. Does anyone have any idea on why this is happening?

Hello, Im Worndering If Anyone Has The SPECS For Absolute Manifold Pressure...

I have a veh at our shop, came in with top end rebuild after overheating. Left prev. repair shop not running correctly. After diag and tearing down and checking cams and procedure from prev. shop. ...