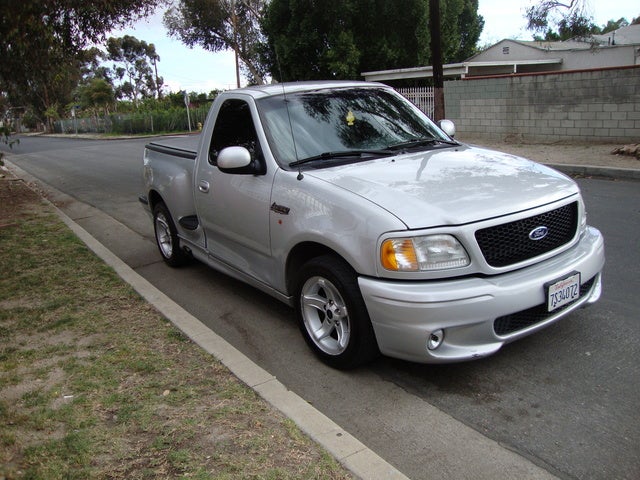 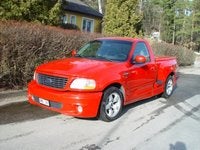 The 2000 Ford F-150 SVT Lightning continued to hold its own as Ford's niche offering in the performance truck market. Racy styling and a lower, easy-handling ride enhanced its street-smart profile, as did its custom 18-inch wheels. The cool-looking truck came off the line in silver for the first time in the 2000 model year, in addition to the previous year's red, white, and black.

But the real appeal of the 2000 Ford F150 SVT Lightning was the power under its hood. Its supercharged 5.4 liter Triton V8 put out 360 horsepower and an impressive 440 ft/lbf of torque. Drivers and reviewers praised its quick acceleration and responsive handling.

The 2000 SVT Lightning didn't offer buyers a broad range of choices, though. Four colors, one configuration (a two-door standard cab short-bed setup), and automatic transmission only were what shipped out of Michigan. The lack of variety certainly didn't stop buyers from snapping up the limited production run, though; you won't find many of these on the resale market.

How Do I Diagnose A/c Issue?

a/c unit stopped working suddenly, cant find blower details in owners manual and not sure where fuse is

Should A Salvaged Title Decrease The Value Of A Car

I have a 2000 ford lightning svt that is in great condition . I want to know if a salvaged title will decrease the trucks value? If so what is the estimated amount that i should subtract from what...

99 views with 6 answers (last answer about a year ago)

No Forward Or Reverse

I was going over 100 mph when I heard a loud pop, after which the engine ran and sounded great but it would not go into any gear forward or reverse.

Where Do The CarGurus Values Come From?

I noticed they always value privately owned cars lower, and don't seem to know what a collectible is. Really screws up sales when they value the truck $5k lower than actual market value and call it Ov...

Misfiring Coilpacks And Truck Does Not Start

On a 2000 ford f150 lightning super charge 5.6 liter what makes the coil packs misfire and tube truck not crank. I have a hot wire running to the coil packs but no ground wire