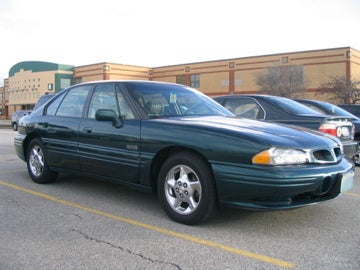 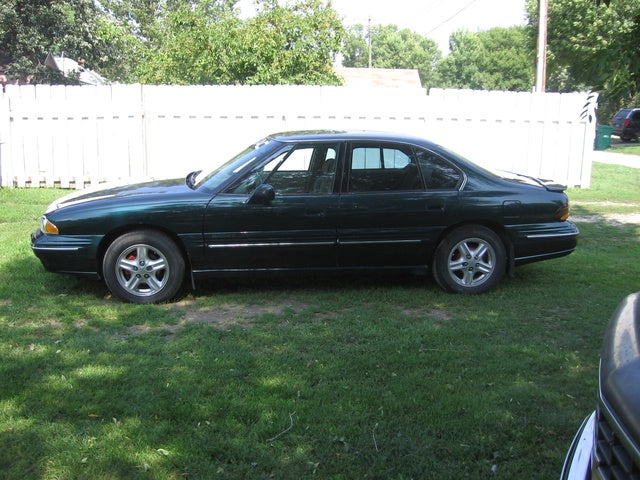 It gots its name from the racing mecca, the Bonneville Salt Flats in Utah, and though it looks like a high-end luxury sedan (which it is) and conjures up memories of big-boat cars from the '60s (and it's still roomy enough for five or six), the 1999 Pontiac Bonneville is also a bit of a sports performer, with a zippy engine and performance suspension that add a little spice to the space.
The 1999 Bonneville was pretty much unchanged from 1998. It came in two trims. Both the SE and sportier SSE came standard with a 3.0-liter, 205-hp V6 engine with a standard 4-speed auto tran. The SSEi package for the SSE offered a supercharged, 240-hp V6 and driver-select 4-speed auto transmission. The SLE package added all the sports suspension, tires, and extra features of the SSEi to the SE trim, except for the supercharged engine. ABS brakes and dual front airbags were standard across the line. Standard features on the SSE, such as leather seats, power-adjustable front seats, audio controls on the steering wheel, and power heated mirrors, were options on the SE.
Plenty of sitting room, legroom, and headroom are highlights of the 1999 Bonneville, and owners especially like the big trunk and comfortable seats. Adjustable seats and an armrest/trunk pass-through are favorite features. The power of the supercharged engine makes driving fun and exciting, and drivers praise the smooth handling and good fuel economy. They say you get a lot of features and performance for a lot less money than other comparable cars. Low points are the persistent problem with a cracked manifold, that Pontiac never fixed in this generation of Bonnevilles. If it has rained or snowed, the trunk lid lets in a lot of water when it's opened. Some report problems with the fuel regulator. Minor complaints mention wind noise and flimsy cupholders.

What's your take on the 1999 Pontiac Bonneville?

Have you driven a 1999 Pontiac Bonneville?
Rank This Car

I have a 1999 Bonneville with Supercharge (supercharge belt is not connected though!). My car won't start. No sound when turn ignition. Changed the battery post bolts, starter, and alternator....stil...

How Do You Remove The Engine Cover On A 99 Bonny? The Front Of The Cover Ap...

removal of the engine cover on a 99 bonny