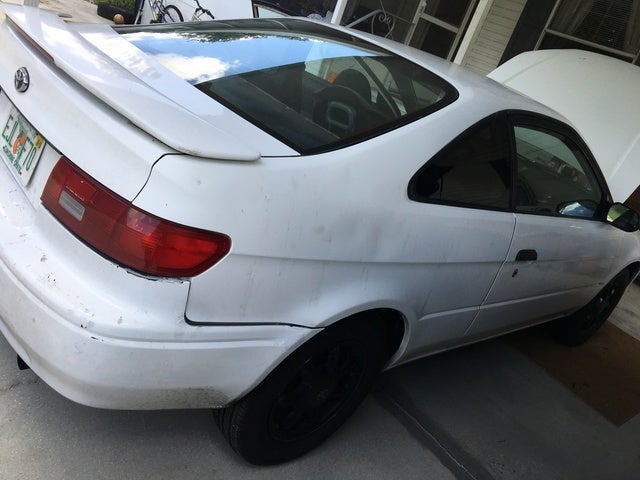 CarGurus has 4 nationwide Paseo listings and the tools to find you a great deal.

For its last year of production, Toyota added a convertible to the Paseo lineup. Despite having a small following of fans, Toyota decided to discontinue the small, sporty coupe after this year. Sales were lagging, and overall consumers were turning away from sporty coupes.

The 1997 Toyota Paseo came in two trim levels, the two-door coupe and the two-door convertible. The convertible had a manual-folding top. Both shared a 1.5-liter, four-cylinder, 93-horsepower engine. A five-speed manual transmission was standard, with the option of a four-speed automatic. Fuel economy was about 27/32 mpg.

The 1997 Toyota Paseo is well liked for its small, sporty looks; excellent fuel economy; and reliability. Most drivers caution that the car is not for more than two people, as the backseat is unreasonably small, and many find the engine to be way underpowered. While the Paseo had its fans, many derided it as a â€œgirl car,â€ and it passed into retirement without much fanfare.

Have you driven a 1997 Toyota Paseo?
Rank This Car

CarGurus has 4 nationwide Paseo listings and the tools to find you a great deal.

I Think My Clutch Went Out

I was downshifting from 4th to third and it decelerated to 20.I put it in 2nd;the rpms revved to 5,000 without me giving it more gas.I then noticed a burning rubber smell from the engine area on my...

Cant get door open on 97 paseo, want schematic for linkage inside door and or solution for entry

Won't Start Was Running Perfect Then Stopped Has Feul Fire And Timing Belt ...

It sometimes will run a little but barely

Can I Disconnect The P/S Pump From The Crank Shaft And Not Worry About The ...

Where Can I Purchase Custom Halogen Headlights For A 1997 Toyota Paseo? Har...

Basically looking for both right and left headlight assembly that looks just like the newer cars that are out now. I hate the old look.