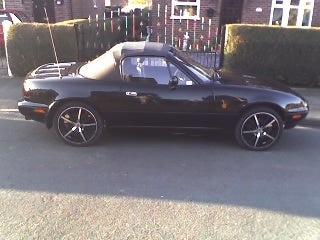 A new STO Edition of Mazda's MX-5 Miata, available in limited numbers, was introduced for 1997. It joined the existing Base model of the MX-5, as well as an upscale M-Edition, which received a makeover, with new Marina Green exterior paint and redesigned alloy wheels.
Standard features for the Base model included a manually operated soft top, power brakes, dual front airbags, remote fuel and trunk releases, an AM/FM/cassette stereo system, and 14-inch wheels. Options included a removable hardtop, air conditioning, power windows, anti-lock brakes, cruise control, a CD player, aluminum alloy wheels, and leather seats.
The M Edition received such upgrades as air conditioning, power windows, anti-lock brakes, a CD player, and leather seats, as well as special interior and exterior colors.
The MX-5 Miata's styling, handling, and quickness, as well as its reliability, all received high marks from drivers. On the negative side, a tight compartment and limited storage space were cited by some drivers (but then again, this is a two-seat convertible roadster, so that's to be expected, right?).

How Much To Replace Clutch On 97 Miata?

How Do I Disable Price Analysis When Selling My Car?

I have a supercharger & a lot of mods on my car. If my car is analyzed my suggested price is much lower than it's worth. I notice several older miata's are advertised at a much higher price withou...

hello, i was wondering if i could build a a 1.8L 97 Miata motor to withstand 11000RPM? is it possible with stock block and forged bottom end and build top end?