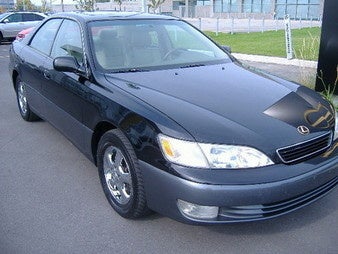 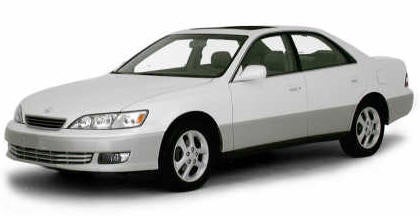 The arrival of the 1997 ES 300 signified the beginning of the third generation of the Lexus entry-level sedan. With the debut of the GS 300 sports sedan in 1993, the ES had been put in an awkward place. The ES was initially conceived a sports sedan, but it fell short of its German competition. When the GS took its place in the sports sedan niche, questions arose about whether the ES 300 was simply a re-badged Toyota. In 1997, a totally redesigned ES 300 aimed to cut all ties between itself and its Toyota counterpart, and to stand on its own as true luxury car.
The ES 300 had expanded in all dimensions: height, length, width, and wheelbase. About seventy pounds were shaved off the vehicle's curb weight. Some refinements to the 3.0 liter V-6 allowed for more power, boosting horsepower from 188 to 200. Engine torque was bumped from 203 to 214 pound-feet. The ES's 0-60 dropped to just over eight seconds, and the quarter mile time snuck under 16. Despite steady power increases, the fuel economy had changed little since 1989. This year, efficiency increased to 19/26 mpg. No matter how much additional horsepower was added, nothing seemed to interrupt the silenced ride.
Although these ESs are under a ten years old, many owners complain about electronic failure for the interior displays. Lighting for both the radio and the instrument cluster dims or disappears. This was an occasional problem throughout the second generation as well. While noteworthy, it is still an infrequent problem. The consensus on the new ES was that it combined comfort, luxury, performance, and safety into one attractive and relatively affordable package.

The oil quantity light comes on after my 1997 lexus es300 has reached operating temperature and then stays on until the engine is shut off. Oil quantity is ok. Do you have an answer for this conditi...

69 views with 3 answers (last answer about a year ago)

How Many Miles Can You Expect To Get Out Of A Lexus Really? There Is One Th...

Trac Off Light Came On

there is a light on the dash that came on. It says "trac off". Pushing the traction control button on the gear shift does nothing. Help!

Not getting gas to the carburetor