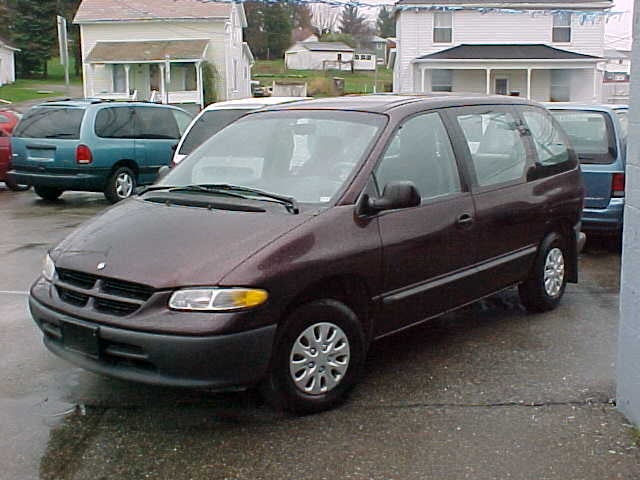 I'm too sexy for my car, so sexy by far...Once again setting the bar high for minivans, Motor Trend's Car of the Year, the 1996 Grand Caravan, revealed a new sleeker, rounder design in place of the boxed-off previous minivan of yore. A larger windshield, sloping roof lines, and wrapound headlights gave owners something to show off as they transported screaming kids to various sporting events.

In 1996, the chassis was redesigned to provide better stability with less noise and shuddering, and it seems to have worked. Inside, the biggest innovation was the introduction of rear seat rollers, to make them easier to remove, a common complaint among previous Grand Caravan owners. As in previous years, the 1996 Grand Caravan offered a first for minivans, by offering the optional second sliding door on the driver's side. That, combined with the low step-in height, made for easier entry and exit. There were probably more cupholders added this year as well, but it's easy to lose count.

Owners responded well to the changes, praising the better interior functionality along with the smoother ride and the responsive driving experience. One thing Dodge didn't seem to address in its 1996 Grand Caravan was the repair record, most notably the transmission headaches that have plagued the number one minivan in America.

What's your take on the 1996 Dodge Grand Caravan?

Have you driven a 1996 Dodge Grand Caravan?
Rank This Car

Would the power distribution center of a 1999 Caravan be compatible to be used in a 1996 Caravan?

Why Is My 1996 Dodge Grand Caravan Just Dying While Driving?

I am a single mom who knows very little about cars although I do change my own oil and brakes,but Iam having a problem with my 1996 dodge grand caravan that I can't figure out and do not have the mone...

Do I need a scanner to read engine codes on a 1996 dodge grand caravan or can I use the trip meter truck?

Light In Dash Board Low Wash

light in dash board came on Low Wash

Cylinders 2 And 5 Not Firing On A 96 Grand Caravan

I am stumped. it just died on me one day. I replaced the coilpack, and it will start and run, but only on 4 cylinders. I replaced the plugs, and wires. Still no change. I was thinking maybe ecm, or ...