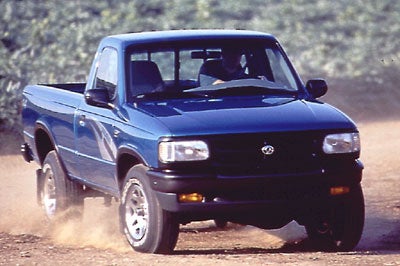 Mazda made only a few additions to its B-Series compact pickup trucks for 1995, including a new dashboard and a driver's-side airbag, which were available across the line. In addition, the entry-level 2.3-liter (2300cc) engine, as well as the 3.0-liter (3000cc) engine, received a boost in power.

In all, 14 different versions of the B-Series trucks were available for 1995, including standard cabs with short beds, standard cabs with long beds, and extended cabs with short beds. In addition, models were available with either two-wheel or four-wheel drive, and with a choice of three engines -- a 112-horsepower 2.3-liter four-cycliner (up from 98 hp the previous year), a 145-horsepower 3.0-liter four-cylinder (up from 140 hp the previous year), and a 160-horsepower, 4.0-liter V6.

A five-speed manual transmission was standard on all models, while a four-speed automatic was optional on the two-wheel drive models.

As in previous years, standard features for the B-Series were limited, and included power brakes, vinyl seats, intermittent windshield wipers, and anti-lock brakes for the rear wheels. Four-wheel anti-lock brakes were standard on models with the the 4.0-liter engine. In addition, a cassette player was standard on some models. Air conditioning, power windows, and power door locks were among the options.

While some drivers felt the B-Series pickups with the lower-end engines were underpowered, they also noted that the trucks were comfortable, reliable, and sporty, with good handling. Some drivers reported problems with the electrical and air conditioning systems on their trucks, but most noted that the vehicles required few repairs other than routine maintenance.

Have you driven a 1995 Mazda B-Series?
Rank This Car

my truck died while driving down road & has not started since this was last wk, it turns over/cranks but wont start up i was told it has no spark ... fuel pumps fine, fuel filter changed, ignition...

Was The Same Frame Used In Other Vehicles?

Hi Was the same frame used in newer model years possibly under a different part number or other ford pick up models or years? If so could anyone list some.

What Parts Do I Need To Change Out For Aftermarket Headlights And Tailights...