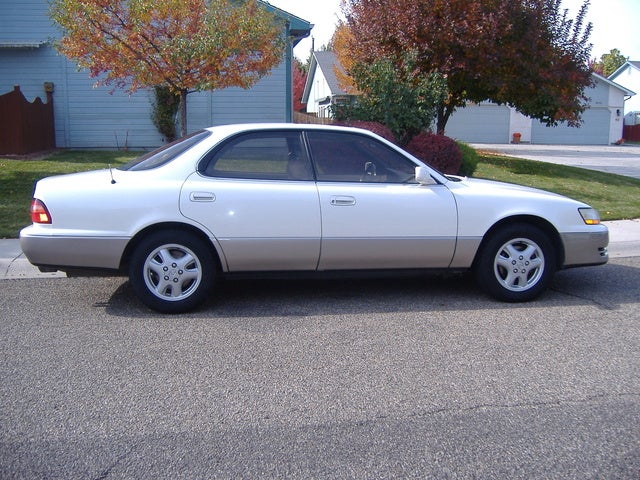 It's hard to describe any Lexus as entry-level, but next to the stately LS 400 and sleek SC coupes, the ES can only be categorized as such. While the ES was priced noticeably higher than its Toyota counterpart, the Camry, it still fell significantly below the European sedans it aimed to compete with. One note for owners and used car shoppers: despite initial sticker price, Lexus does retain a higher resale value than many competitors. In 1995, the ES received some aesthetic enhancements and an in-trunk CD changer was added as an option.
Through the years, Lexus been incrementally adding additional power to the mid-size sports sedan. First, the 2.5 liter V-6 was replaced with a 3.0, and later a new aluminum block added a few more horses. The 1995 ES 300's 3.0 liter V-6 made 188 horsepower and provided 203 pound-feet of torque. The ES now came only with a four-speed automatic transmission, and all were front wheel drive. Despite the steady horsepower increases, the ES's gas mileage had remained at 19/25 mpg.
By 1995, the ES 300 was the best selling Lexus. Although the vehicle was not a genuine high performance sports sedan or a truly dynamic spectacle, it did embody affordable luxury and solid reliability. Lexus started out riding the coat tails of Toyota's reputation for build quality and trouble-free ownership. However, seven years in to their pursuit, the Lexus was now reinforcing that reputation.

It's cold (24degrees) stared the car yesterday fine. Today go to start and just getting a fast clicking noise and battery is fine.

Try to crank won't do anything no clicking sound or anything

Where Is The Cd Changer

When Taking Off In Drive It's Slow /engine Light Came On

When going to take off in drive the car is slow es300 Lexus 1995 200k. Oil is good transmission fluid we just put some in . Light went off but the acceleration is still slow . Help need car to las...

407 views with 5 answers (last answer about a year ago)

I noticed the headlights dimming one night on my way home then all of a sudden everything on my dash went out and the car started jumping and jerking, I was able to get it pulled over and thought ...